Bhirrana or Birhana is a small village located in Fatehabad District. The site is situated about 220 km to the northwest of New Delhi on the New Delhi-Fazilka national highway and about 14 km northeast of the district headquarters on the Bhuna road in the Fatehabad district. The site is one of the many sites seen along the channels of the ancient Saraswati riverine systems, now represented by the seasonal Ghaggar River which flows in modern Haryana from Nahan to Sirsa. 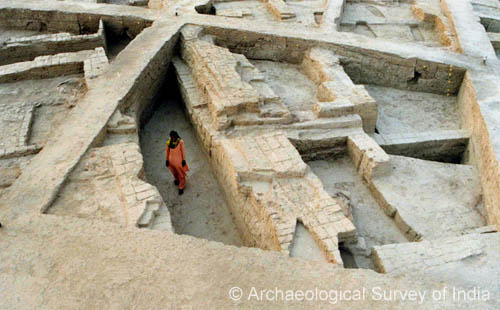 According to Rao, Hakra Ware has been found at Bhirrana, and is pre-Harappan, dating to the 8th-7th millennium BCE. Hakra Ware culture is a material culture which is contemporaneous with the early Harappan Ravi phase culture (3300-2800 BCE) of the Indus Valley. According to Dikshit and Rami, the estimation for the aniquity of Bhirrana is based on two calculations of charcoal samples, giving two dates of respectively 7570-7180 BCE, and 6689-6201 BCE.

Banawali is an archaeological site belonging to Indus Valley Civilization period in Fatehabad district, Haryana, India and is located about 120 km northeast of Kalibangan and 16 km from Fatehabad. Banawali, which is earlier called Vanavali, is on the left banks of dried up Sarasvati River. Comparing to Kalibangan, which was a town established in lower middle valley of dried up Sarasvathi River, Banawali was built over upper middle valley of Sarasvathi River.

Archaeological Survey of India has done excavation in this place revealed well constructed fort town of Harappan period overlaying an extensive proto urban settlement of pre Harappan Period. A defence wall was also found with a height of 4.5 m and thickness of 6 m which was traced up to a distance of 105 m.  Houses, with rammed earthen floors, were well planned with rooms and toilets and houses were constructed on either sides of streets and lanes.Near South-eastern area of fortification, flight of steps is found rising from ‘Lower town’ to Acropolis and ASI considers this as important formation.The staircase of ‘lower town’ is near a bastion looking construction

Balu is a small archeological site attributed to the Indus Valley Civilisation, located some 22 kilometres  south of the city of Kaithal in the Indian state of Haryana.This is a small fortified settlement which has yielded several plant remains.

Farmana Khas or Daksh Khera is an archaeological site in Meham block of Rohtak district in northern Indian state of Haryana spread over 18.5 hectares. It is located near the village of Farmana Khas, about 15 kilometers from the Rohtak-Hissar highway and 60 kilometres from Delhi. It is significant particularly for its burial site, with 70 burials, of the Mature Harappan period (2500–2000 BC) and fairly recent addition (excavation started during 2006) to Indus Valley Civilisation sites excavated in India.

Rakhigarhi, or Rakhi Garhi (Rakhi Shahpur + Rakhi Khas), is a village in Hisar District in the state of Haryana in India, situated 150 kilometers to the northwest of Delhi. It is the site of a pre-Indus Valley Civilisation settlement going back to about 6500 BCE. Later, it was also part of the mature Indus Valley Civilisation, dating to 2600-1900 BCE. The site is located in the Ghaggar-Hakra river plain, some 27 km from the seasonal Ghaggar river.

Rakhigarhi encompasses a set of seven mounds, and there are many more settlement mounds in the immediate vicinity. Not all of them were occupied at the same time. Depending on which mounds to include, the estimates of the size of Rakhigarhi have been given variously as between 80 and 550 hectares.In January 2014, the discovery of additional mounds resulted it in becoming the largest Indus Valley Civilization site, overtaking Mohenjodaro (300 Hectares) by almost 50 hectares, resulting in almost 350 hectares.

Milakpur is an Indus Valley Civilization site and village situated in the Bhiwani district of Haryana, India. Bolstering the status of Rakhigarhi as the largest Indus Valley Civilization metropolis on the banks of Drishadvati river (current day paleochannel of Chautang), at least 23 other Indus Valley Civilization sites within 5 km (at 4 sites), 10 km (at least 10 sites) and 15 km (at least 9 sites) radius of Rakhigarhi have been discovered till 2001. Some of the raw materials were procured from the nodal Rakhigarhi site and finished products were brought back to the nodal Rakhigarhi site for marketing. Within 5 km radius are early Harappan (4600 BCE – 2800 BCE) site of Gamra and mature Harappan (2600 BCE – 1400 BCE) sites of Budana, Haibatpur and Lohari Ragho 3. Within 5 km to 10 km radius, early Harappan sites are Lohari Ragho 1, Lohari Ragho 2 and Kheri Lochab-Kheri Jalab. Mature Harappan small farmstead sites are Milakpur and Gunkali. Small farmstead sites of Kinnar, Nara and Mirchpur have material from both mature and late Harappan period. late Harappan (after 1400 BCE) sites are Sotha and Gandaswala Khera.

Lohari Ragho is a village located in Hisar, Haryana, India. It is 55 km from Hisar and 178 km from Chandigarh.It is located near the bigger ancient site of Rakhigarhi.

Three mounds belonging to the Sothi-Siswal ceramic period were found during excavations in 1980. Archaeological remains were reported first time by Dhoop Singh and Chanderpal Singh from the Department of Archaeology and Museums, Haryana. A lot of Harappan ceramics have been found on the site such as globular jars, vases, bowls, basins and fast wheel pottery made of red ware.

Srughna, also spelt Shrughna, was an ancient city of India frequently referred to in early and medieval texts. It was visited by Chinese traveller, Xuanzang (Hiuen Tsang) in the 7th century and was reported to be in ruins even then although the foundations still remained. Xuanzang described the city as possessing a large Buddhist vihara and a grand stupa dating to the time of the Mauryan emperor, Ashoka. Xuanzang saw several stupas, which commemorated the visit of the Buddha or enshrined the relics of Buddhist monks Sariputra and Maudgalyayana. Alexander Cunningham identified the lost city with the village of Sugh (or Sugha) situated 5 kilometres from Yamunanagar in the state of Haryana. The city probably lost its importance after the 7th century and the name survived in a localized form. Panjab University’s 1965 excavation found artifacts dating from 600 BCE to 300 CE, including grey ware and red ware pottery, coins, seals, animal remains, male and female terracotta figurines, animal terracotta figurines and miscellaneous terracotta objects such as flesh rubbers, crucibles, rattle, gamesmen, stamp, seal impression, discs, frames and wheels, balls, goldsmiths heating cup, an ear ornament grooved on the exterior and a broken figurine of a headless child with writing board in lap with sunga (187 BCE to 78 BCE) period alphabets. Collection of these figurines belong to Sunga, Mauryan, Kushana, Gupta and medieval period.