As per Constitution of India, Haryana is governed through a Governor appointed by the President of India. The Governor represents the centre at the state level. However, the post is largely ceremonial and the actual power rests with the Chief Minister, elected by the people. Moreover, administrative system follows the all India pattern. It is divided into three parts – legislative, executive and judiciary.

Chief Secretary Office (CSO) is the principal executive office of the Government of Haryana. It deals with several matters, including, the Council of Ministers, Vigilance, personnel, parliamentary affairs etc. It formulates policies pertaining to service matters, reservation, employment, ex-gratia, upgradation etc. applicable to all Departments of Haryana Government. 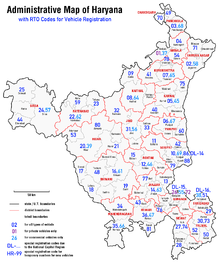 It monitors and coordinates the work pertaining to departments,   boards, corporations and offices of Haryana Government. CSO issues advice to State Government departments on matters referred to it. Administrative control & establishment of IAS/HCS officers, Haryana Secretariat Services, Ministerial staff of Secretariat rests with this office. Presently, emphasis is being laid on bringing about administrative reforms, computerization, better delivery of services to public, transparencies etc.

At the district level, the administration is carried on by the Deputy Commissioner, who is also known as District Collector and/or District Magistrate. He is the senior most officer in the district and is entrusted with the job of implementing all the government programs in areas under his jurisdiction. He is assisted by a team of officers including the Sub Divisional Magistrates, District Revenue Officers, District Welfare Officers, Tehsildars, Naib Tehsildars etc.

The administration at the block level is carried on by Block Development and Panchayat Officers (BDPO). Apart from implementing government programs and collection of revenue at block level he also has to interact with different Gram Panchayats located in areas under his jurisdiction.

A system of local governance is prevalent in all stages in Haryana. While most cities and towns have Municipal Corporations and Councils to take care of local administration, the state also has 21 also Zila Parishads, 119 panchayat Samitis and 6083 Gram Panchayats to look after the administration at village level.

To have better co-ordination and control on the working of municipalities in the State, the Directorate of Urban Local Bodies Department, Haryana was established on 1st April, 1982 . The Department was established to give impetus to the 74th Amendment of the Constitution and to lay a solid foundation for the Urban Development in the State of Haryana. Haryana is one of the most progressive States in India and its people are quite proactive in keeping themselves abreast of the changing global landscape. With rapid urbanization, growing needs of the citizens for efficient & effective service delivery, better civic amenities thereby providing better living standards, the activities of the department have multiplied manifolds. For efficient and effective service delivery, the Department is encouraging replacement of traditional delivery system of public services by new and improved system of governance that works better, costs less and is capable of serving the citizens’ needs with ease.