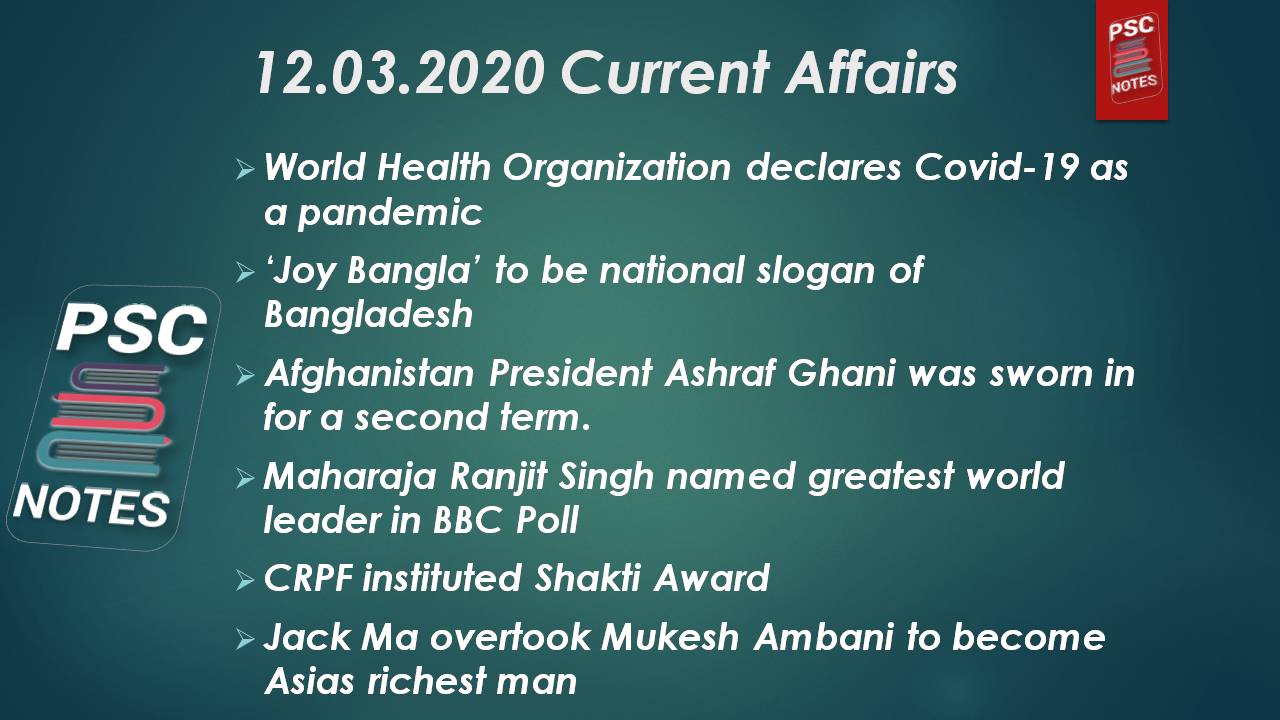 Haryana departments to have property tax head in their budgets

The Haryana government has asked all its departments to create a property tax head in their budgets under the expenses category, so that they can disburse the same to the municipal corporations concerned on time.

However, such directive has not been issued for the first time, said an official, adding that earlier also a similar provision was made in the budgets of all departments. But, this time, since the instruction has been given by the chief minister after the municipal bodies raised a complaint before him, it is likely to yield the desired results.

World Health Organization (WHO) has characterised the new coronavirus outbreak as a pandemic.

WHO chief Tedros Adhanom Ghebreyesus told reporters in Geneva that he is alarmed by the spread and severity of the outbreak, along with a lack of action taken to combat it.

WHO chief said the number of cases and deaths are likely to rise in the coming days and weeks.

UN chief Antonio Guterres has urged world governments to urgently scale up their response to the novel coronavirus if they are to stand a chance of stemming its spread.

The declaration of a coronavirus outbreak as a pandemic is a call to action – for everyone, everywhere.

‘Joy Bangla’ to be national slogan of Bangladesh

In an order passed, the two judge bench of High Court asked the authorities to take necessary steps so that all the people holding constitutional posts and state officials use ‘Joy Bangla’ after their speeches on national days and other appropriate occasions.

The court also directed the authorities to ensure that teachers and students use the slogan after assembly.

‘Joy Bangla’ was the main slogan during the liberation war of Bangladesh fought against Pakistan in 1971.

The first President of Bangladesh Sheikh Mujibur Rahman also used ‘Joy Bangla’ in his speeches and specially during his historic 7th March speech in 1971 declaring the goal of independence for Bangladesh.

Ashraf Ghani sworn in as Afghanistan President for second term

Afghanistan President Ashraf Ghani was sworn in for a second term.

His rival Abdullah Abdullah held a parallel inauguration that could plunge the country deeper into crisis ahead of peace talks with the Taliban.

The oath-taking ceremony of Afghan President Ashraf Ghani was attended by hundreds of people, including visiting foreign dignitaries, diplomats and senior political figures.

Ghani was declared as the winner of the election held last September, but Abdullah Abdullah, who disputed the vote, held a parallel ceremony surrounded by hundreds of supporters.

Maharaja Ranjit Singh, the 19th century ruler of the Sikh Empire in India, has beaten competition from around the world to be named the “Greatest Leader of All Time” in a poll conducted by ‘BBC World Histories Magazine’.

Over 5,000 readers voted in the poll. Polling more than 38 per cent of the vote, Singh was praised for creating a new tolerant empire.

In second place, with 25 percent of the vote, is African Independence Fighter Amílcar Cabral, who united more than 1 million Guineans to free themselves from Portuguese occupation and in turn propelled many other colonised African countries to rise and fight for independence.

Further down the list, American President Abraham Lincon is at four and British monarch Elizabeth I is the highest ranked female leader at five.

The Central Reserve Police Force (CRPF) has instituted a special ‘Shakti Award.’ It will be annually presented to chosen personnel who works for the empowerment of women.

The award was announced on International Women’s Day on 8 March. The award will be conferred every year on 19 March, the CRPF Raising Day.

Women who work for creating women-friendly infrastructure, better work environment, ease of living with safety, addressing women-specific issues, and related innovation and initiatives will be awarded.

The award will carry a reward of Rs.1 lakh, a citation, and a trophy.

The award aims to recognize the best practices and efforts made towards women empowerment and gender equality in the force.

It aims to motivate CRPF personnel to do better and innovate in the field.

CRPF has raised the world’s first all-women battalion with a strength of over 1,000 personnel in 1986. Currently, there are six such battalions.

Bloomberg Billionaires Index reported that Jack Ma became Asia’s richest man. Mukesh Ambani, who stood as Asia’s richest man, has moved to the second position after oil prices collapsed along with global stocks. The novel coronavirus erased $5.8 billion from Ambani’s net worth on and pushed him to No.2 on the list of Asia’s richest people.

Jack Ma is the founder of Alibaba Group Holding Ltd. He topped the list with a $44.5 billion fortune, which is $2.6 billion more than Ambani. Earlier, in mid-2018, Ma topped the list.