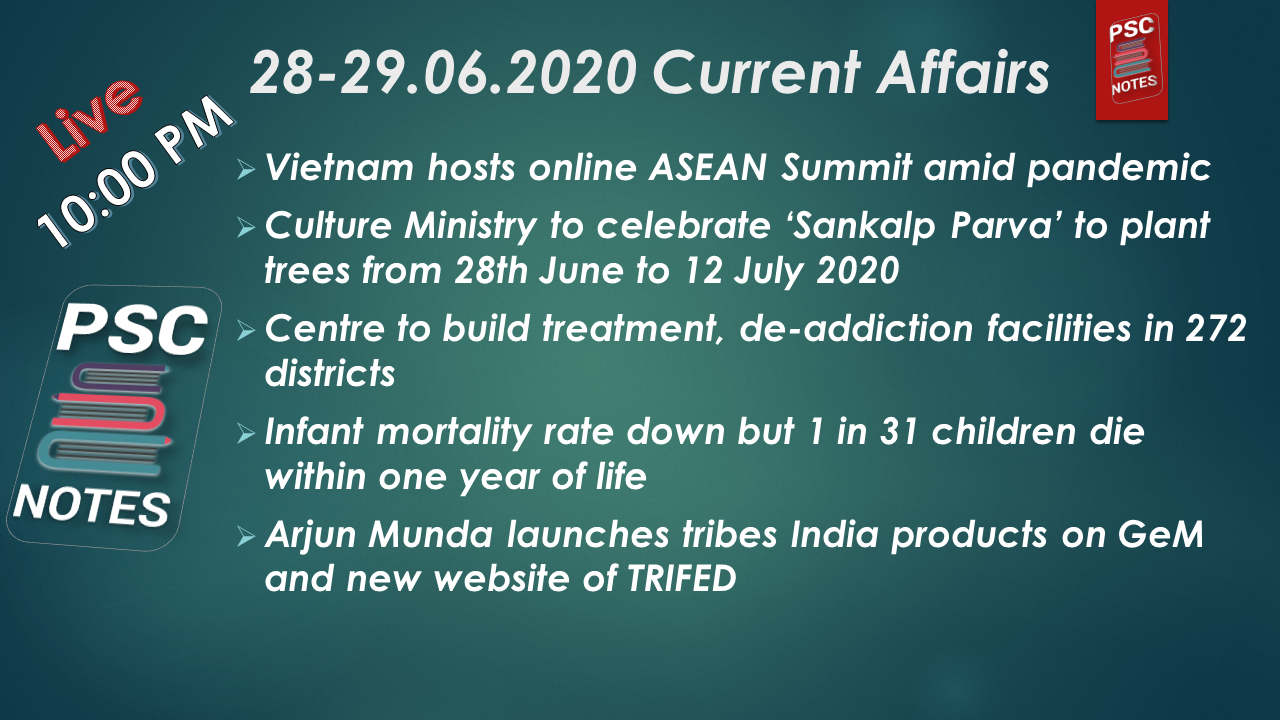 The Haryana government has decided against no power cuts from noon to 4pm in about 1,000 villages having less than 60% line loss. The decision also aims to ensure smooth power supply this summer so that people do not face any problem. Also, under the ‘Mera Gaon Jagmag Gaon Yojana’, 24-hour power supply is being provided in about 4,500 villages of the state.

Southeast Asian leaders held their annual summit by video to show unity and discuss a regional emergency fund to respond to the immense crisis brought by the coronavirus pandemic.

Long-divisive South China Sea conflicts were also in the spotlight.

The leaders of the Association of Southeast Asian Nations talked online due to regional travel restrictions and health risks.

Vietnam, the current ASEAN chair, had planned face-to-face meetings, but most member states assessed it was still too risky for leaders to travel.

On the call of the Prime Minister, the Union Culture Ministry will celebrate “Sankalp Parva” to plant trees from 28th June to 12 July 2020.

Prime Minister Narendra Modi has called for planting at least five trees either in Office campus or wherever it is possible, to ensure a clean and healthy environment of the country.

To step up the battle against drug use and alcoholism, the Centre rolled out its action plan for 2020-21 with focus on building treatment and de-addiction facilities in 272 districts identified as vulnerable based on prevalence of substance abuse and access to drugs. The focus will be on reaching the youth and the high risk population.

Since 125 of the 272 districts do not have Integrated Rehabilitation Centres for Addicts (IRCAs) supported by the Centre, it has been decided to set up addiction treatment facilities in government hospitals through the National Drug Dependence Treatment Centre of All India Institute of Medical Sciences.

Going by the findings of the ‘Magnitude of Substance Abuse in India’ report 2019, of the estimated 16 crore alcohol consumers in the country, 19% were dependent on alcohol. Around 5.7 crore users required treatment. Among drug users 72 lakh required treatment for cannabis, 60 lakh for opioids and 11 lakhs for sedatives.

The latest data released by the Registrar General and Census Commissioner of India shows that infant mortality rate for the country has come down to 32 in 2018 from 40 in 2013, a decline of eight points over last five years and an annual average decline of about 1.6 points. Despite this decline, one in every 31 infants at the national level, one in every 28 infants in rural areas and one in every 43 infants in urban areas still die within one year of life.

Madhya Pradesh paints a worrisome picture with the highest IMR at 48 and Kerala has the lowest IMR of 7.

In 2018, around 82.5% of the deliveries were institutional which includes government as well as private hospitals. The percentage of institutional deliveries in urban areas is 94.7 as against about 78.1 %recorded in rural areas.

Union Minister of Tribal Affairs Arjun Munda launched through a video conference the tribes India products on Government e-Marketplace – GeM and a new website of TRIFED.

The TRIBES India store on Government eMarketplace can now help in facilitating purchases by the government.

The  new website has all relevant details about the schemes and initiatives  to benefit  tribal communities.

The Team of “Trifed Warriors” will take Tribal Commerce based on forest products, handlooms and handicrafts to a new high for transforming tribal lives and livelihoods.