West Bengal has emerged as the worst, while new Union Territories (UTs) of Jammu & Kashmir (J&K) and Ladakh have notched up an impressive show.

The ratings have ranked states according to DBT payouts compared to their population.

Many states like West Bengal do not implement several central schemes in which subsidies are involved.

The central DBT scheme covers as many as 439 schemes run by 56 ministries and departments and over Rs 2.25 lakh crore has been paid out in the country in the present financial year.

The purpose of World NGO Day is to encourage people to be actively involved in NGOs and encourage more synergy between NGOs and both the public and private sectors.

In 2010, 12 members of the Baltic Sea NGO Forum were officially recognized by the nations.

In 2014, the United Nations, European Union leaders and international organizations marked the day for the first time.

The day was observed to draw public attention, raise awareness, and educate India on the health benefits of protein.

Globally many countries recognize it as the Protein Day and from this year India will also join this movement.

The key objective through the day’s activities and beyond will be to spread more knowledge about protein and bring about a behavioral change by persuading Indians to eat adequate protein in every meal.

The Government of India (GoI) has announced that it is to organize the mega event “Responsible AI for Social Empowerment 2020” (RAISE 2020). It will be India’s first Artificial Intelligence (AI) summit. The event will be held from 11-12 April in New Delhi.

RAISE 2020 will be organized by the Government in partnership with Industry & Academia.

The summit aims to exchange ideas and charter a course to use AI for social empowerment, inclusion, and transformation in key areas like Healthcare, Agriculture, Education and Smart Mobility amongst other sectors of great minds.

The share non-aeronautical revenue of the joint venture airport in New Delhi is at 70%. The global average is 40%.

From this 70%, 34% comes from retail, food and beverage, and duty-free components.

With an imperative to empower the youngest minds of the country with the latest technologies, NITI Aayog, Atal Innovation Mission (AIM) in collaboration with the National Association of Software and Services Companies (NASSCOM) launched an AI based Module rolled out for students in Indian schools.

The AI-Base Module has been introduced with an objective for students to leverage the full potential of AIM’s Atal Tinkering Lab (ATL) and further empowers them to innovate and create valuable solutions benefiting societies at large.

The module contains activities, videos and experiments that enable students to work through and learn the various concepts of AI.

Atal Innovation Mission housed at NITI Aayog is the Government of India’s flagship initiative to promote a culture of innovation and entrepreneurship.

At the school level, AIM is establishing ATLs in all districts across India.

Centre lifts the ban on onion

The government decided to lift the ban on the export of onions as the price of onion has been stabilized. The move will protect the interests of farmers as prices are likely to fall sharply due to a bumper rabi crop. The decision was approved in a meeting of a Group of Ministers (GOM) headed by Home Minister Amit Shah. The lifting of ban on onion is expected to be effective. GOM will also discuss whether to reduce or scrap the Minimum Export Price (MEP) on onion to facilitate outbound shipments. 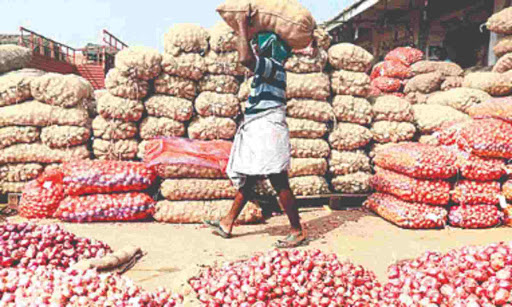