The Chalukya dynasty was an Indian royal dynasty that ruled large parts of southern and central India between the 6th and the 12th centuries. During this period, they ruled as three related yet individual dynasties. The earliest dynasty, known as the “Badami Chalukyas”, ruled from Vatapi (modern Badami) from the middle of the 6th century. The Badami Chalukyas began to assert their independence at the decline of the Kadamba kingdom of Banavasi and rapidly rose to prominence during the reign of Pulakeshin II. After the death of Pulakeshin II, the Eastern Chalukyas became an independent kingdom in the eastern Deccan. They ruled from Vengi until about the 11th century. In the western Deccan, the rise of the Rashtrakutas in the middle of the 8th century eclipsed the Chalukyas of Badami before being revived by their descendants, the Western Chalukyas, in the late 10th century. These Western Chalukyas ruled from Kalyani (modern Basavakalyan) until the end of the 12th century.  The rule of the Chalukyas marks an important milestone in the history of South India and a golden age in the history of Karnataka. The political atmosphere in South India shifted from smaller kingdoms to large empires with the ascendancy of Badami Chalukyas. A Southern India-based kingdom took control and consolidated the entire region between the Kaveri and the Narmada rivers. The rise of this empire saw the birth of efficient administration, overseas trade and commerce and the development of new style of architecture called “Chalukyan architecture”. Kannada literature, which had enjoyed royal support in the 9th century Rashtrakuta court found eager patronage from the Western Chalukyas in the Jain and Veerashaiva traditions. The 11th century saw the birth of Telugu literature under the patronage of the Eastern Chalukyas.

In the 6th century, with the decline of the Gupta dynasty and their immediate successors in northern India, major changes began to happen in the area south of the Vindhyas – the Deccan and Tamilaham. The age of small kingdoms had given way to large empires in this region. The Chalukya dynasty was established by Pulakeshin I in 543. Pulakeshin I took Vatapi (modern Badami in Bagalkot district, Karnataka) under his control and made it his capital. Pulakeshin I and his descendants are referred to as “Chalukyas of Badami”. They ruled over an empire that comprised the entire state of Karnataka and most of Andhra Pradesh in the Deccan. 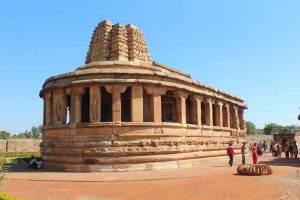 The Chalukyas revived their fortunes in 973 after over 200 years of dormancy when much of the Deccan was under the rule of the Rashtrakutas. The genealogy of the kings of this empire is still debated. One theory, based on contemporary literary and inscriptional evidence plus the finding that the Western Chalukyas employed titles and names commonly used by the early Chalukyas, suggests that the Western Chalukya kings belonged to the same family line as the illustrious Badami Chalukya dynasty of the 6th century while other Western Chalukya inscriptional evidence indicates they were a distinct line unrelated to the Early Chalukyas.

Chalukyas of Vengi Main article: Eastern Chalukyas Pulakeshin II conquered the eastern Deccan, corresponding to the coastal districts of modern Andhra Pradesh in 616, defeating the remnants of the Vishnukundina kingdom. He appointed his brother Kubja Vishnuvardhana as Viceroy in 621. Thus the Eastern Chalukyas were originally of Kannada stock. After the death of Pulakeshin II, the Vengi Viceroyalty developed into an independent kingdom and included the region between Nellore and Visakhapatnam.

The Badami Chalukya era was an important period in the development of South Indian architecture. The kings of this dynasty were called Umapati Varlabdh and built many temples for the Hindu god Shiva. Their style of architecture is called “Chalukyan architecture” or “Karnata Dravida architecture”. Nearly a hundred monuments built by them, rock cut (cave) and structural, are found in the Malaprabha river basin in modern Bagalkot district of northern Karnataka. The building material they used was a reddish-golden Sandstone found locally. These cave temples are basically excavations, cut out of the living rock sites they occupy. They were not build as their structural counterparts were, rather created by a special technique known as “subtraction” and are basically sculptural. Though they ruled a vast empire, the Chalukyan workshops concentrated most of their temple building activity in a relatively small area within the Chalukyan heartland – Aihole, Badami, Pattadakal and Mahakuta in modern Karnataka state.

Their temple building activity can be categorised into three phases. The early phase began in the last quarter of the 6th century and resulted in many cave temples, prominent among which are three elementary cave temples at Aihole (one Vedic, one Jain and one Buddhist which is incomplete), followed by four developed cave temples at Badami (of which cave 3, a Vaishnava temple, is dated accurately to 578 CE). These cave temples at Badami are similar, in that, each has a plain exterior but an exceptionally well finished interior consisting of a pillared verandah, a columned hall (mantapa) and a cella (shrine, cut deep into rock) which contains the deity of worship. In Badami, three caves temples are Vedic and one in Jain. The Vedic temples contain large well sculpted images of Harihara, Mahishasuramardhini, Varaha, Narasimha, Trivikrama, Vishnu seated on Anantha (the snake) and Nataraja (dancing Shiva).

The second phase of temple building was at Aihole (where some seventy structures exist and has been called “one of the cradles of Indian temple architecture”[109]) and Badami. Though the exact dating of these temples has been debated, there is consensus that the beginnings of these constructions are from c. 600.These are the Lad Khan Temple (dated by some to c. 450 but more accurately to 620) with its interesting perforated stone windows and sculptures of river goddesses; the Meguti Jain Temple (634) which shows progress in structural design; the Durga Temple with its northern Indian style tower (8th century) and experiments to adapt a Buddhist Chaitya design to a brahminical one (its stylistic framework is overall a hybrid of north and south Indian styles.); the Huccimalli Gudi Temple with a new inclusion, a vestibule, connecting the sanctum to the hall. Other dravida style temples from this period are the Naganatha Temple at Nagaral; the Banantigudi Temple, the Mahakutesvara Temple and the Mallikarjuna Temple at Mahakuta; and the Lower Sivalaya Temple, the Malegitti Sivalaya Temple (upper) and the Jambulingesvara Temple at Badami. Located outside the Chalukyan architectural heartland, 140 km south-east of Badami, with a structure related to the Early Chalukya style is the unusual Parvati Temple at Sanduru which dates to the late 7th century. It is medium-sized, 48 ft long and 37 ft wide. It has a nagara (north Indian) style vimana (tower) and dravida (south Indian) style parts, has no mantapa (hall) and consists of an antarala (vestibule) crowned with a barrel vaulted tower (sukhanasi). The “staggered” base plan of the temple became popular much later, in the 11th century.

The structural temples at Pattadakal, built in the 8th century and now a UNESCO World Heritage Site, marks the culmination and mature phase of Badami Chalukyan architecture. The Bhutanatha group of temples at Badami are also from this period. There are ten temples at Pattadakal, six in southern dravida style and four in the northern nagara style. Well known among these are the Sangamesvara Temple (725), the Virupaksha Temple (740–745) and the Mallikarjuna Temple (740–745) in the southern style. The Papanatha temple (680) and Galaganatha Temple (740) are early attempts in the nagara – dravida fusion style. Inscriptional evidence suggests that the Virupaksha and the Mallikarjuna Temples were commissioned by the two queens of King Vikramaditya II after his military success over the Pallavas of Kanchipuram. Some well known names of Chalukyan architects are Revadi Ovajja, Narasobba and Anivarita Gunda.

The reign of Western Chalukyas was an important period in the development of Deccan architecture. Their architecture served as a conceptual link between the Badami Chalukya architecture of the 8th century and the Hoysala architecture popularised in the 13th century.The centre of their cultural and temple-building activity lay in the Tungabhadra region of modern Karnataka state, encompassing the present-day Dharwad district; it included areas of present-day Haveri and Gadag districts. Here, large medieval workshops built numerous monuments.These monuments, regional variants of pre-existing dravida temples, defined the Karnata dravida tradition.

Mains Test Series and Notes (With Evaluation and Skill Enhancement)

For Any Suggestion’s and Updates kindly Comments your doubts Here