Manushi Chhillar (born 14 May 1997) is an Indian model and beauty pageant titleholder who was crowned Miss World 2017. She was previously crowned Femina Miss India 2017, and is the sixth Indian woman to win the title of Miss World. 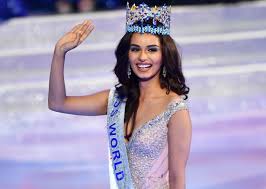 Om Prakash Puri OBE (18 October 1950 – 6 January 2017) was an Indian actor who appeared in mainstream commercial Indian films, as well as independent and art films. He is best known for his author-backed roles in films like Aakrosh (1980), Arohan (1982) and television films like Sadgati (1981) and Tamas (1987) and also light-hearted roles in Jaane Bhi Do Yaaro (1983) and Chachi 420 (1997). He had various collaborations with director Shyam Benegal and Govind Nihalani. Puri also appeared in non-Indian productions in the United States, Britain and Pakistan. Puri was awarded Padma Shri, the fourth highest civilian award of India, in 1990; and in 2004, was made an honorary Officer of the Order of the British Empire. He was speculated to receive the Dada Saheb Phalke Award this year.

Pandit Jasraj (born 28 January 1930) is an Indian classical vocalist. He belongs to the Mewati gharana of Hindustani classical music.

Jasraj was born on 28 January 1930 in Pili Mandori, a village in the Hisar district of Haryana (now Fatehabad district) in a middle-class family to Motiram, a classical singer. Motiram died in 1934 when Jasraj was four, on the day he was to be appointed as the state musician in the court of Osman Ali Khan. Jasraj spent his youth in Hyderabad, and travelled often to Sanand to study music with musicians of the Mewati gharana. In 1946, Jasraj moved to Kolkata, where he began singing classical music for radio. He is married Madhura Shantaram, the daughter of film director V. Shantaram, whom he had first met in 1960 in Mumbai.They married in 1962, initially living in Kolkata, and moved to Mumbai in 1963.They have two children, a son, Shaarang Dev Pandit, and a daughter, Durga Jasraj, a television anchor and presenter. Jasraj’s wife Madhura has directed documentaries and children’s plays, and directed and produced ballets, Geeta-Govinda, Kaan Kahaani and Surdas, and the TV series, Faster Phene. Madhura made a film, Sangeet Martand Pandit Jasraj in 2009 and directed her first Marathi film, Aai Tuzha Aashirwad, in 2010, in which her husband and Lata Mangeshkar sang in Marathi. Music composers Jatin-Lalit are Jasraj’s nephews, and Sulakshana Pandit and Vijayta Pandit, both of whom played leading roles as heroines in many Hindi films in 1970s and 1980s, are his niece.

Sonu Nigam (born 30 July 1973) is an Indian musician, singer, composer, music producer, recordist, music programmer, live performer and actor.  He prominently sings in Hindi and Kannada language films. He has also sung in Bengali, Gujarati, Tamil, Telugu, Marathi, Tulu, Assamese, Odia, Nepali, Maithili and various Indian languages. He has also released Indian pop albums and acted in a number of films.He has been one of the highest paid Indian singers.

Preeti Singh (born 26 October 1971) is an Indian author based at Chandigarh. Preeti has been working as a professional writer since last 15 years before authoring her two best-selling novels. Her debut novel – Flirting With Fate was published by Mahaveer Publishers, India in 2012, followed by Crossroads which was published by Authors Press, India in 2014. Her second and latest book Crossroads has made its place in the India Book Of Records as the First Indian Fiction having real life people as characters.  On 17 December 2015, She was felicitated with the Swayamsiddha Award for self-made women who have been self achievers in their fields, by the Anupama Foundation, Lucknow. Her third crime thriller novel Watched, published by Omji Publishing House, released in October 2016.

Rajkummar Rao (born 31 August 1984 as Rajkumar Yadav) is an Indian actor often regarded as one of the most talented actors of Bollywood. Rao has established a career in Hindi cinema and is the recipient of a National Film Award and a Filmfare Award after three nominations.  Born and raised in a Ahirwal family in Gurgaon, Ahirwal, Haryana, Rao graduated in arts from the University of Delhi and later studied method acting at the Film and Television Institute of India. After graduating, he moved to Mumbai for a film career and made his film debut with the experimental anthology film Love Sex Aur Dhokha (2010). After starring in brief roles in several of the highly successful Hindi films of the following years, he achieved success for his breakout role with the drama film Kai Po Che! (2013), for which he received nomination for the Best Supporting Actor at Filmfare. He rose to prominence with his portrayal of Shahid Azmi in the critically acclaimed biographical drama Shahid (2013), for which he was awarded the National Film Award for Best Actor and Filmfare Critics Award for Best Actor. He followed this by starring as the lead role in the successful romantic comedy Queen (2014) and the acclaimed drama CityLights (2014). Rao received critical acclaim for the biographical drama Aligarh (2016) for which earned him a second nomination for Best Supporting Actor at Filmfare.

Dayachand Mayna was a poet of Haryanvi language. He is one of the important poets and folklore artists Haryana had ever produced. He was born on March 10, 1915, in a Valmiki caste family in Mayna village of Rohtak district of Haryana (erstwhile Punjab). He produced best of the Haryanvi Saang and Raagni, his work challenged the Brahminism of his time. He wrote a very famous play (Kissa) on Netaji Subhash Chandra Bose. He wrote 16 Kissas(play in Haryanvi) and more than 100 Raagniyaan(poem in Haryanvi). He died on January 20, 1993.

He is regarded as the John Milton of Haryana, he is the only poet of Haryana who acquired the status of Rashtriya Kavi (National Poet), his poetry in Haryanvi is not less than Lakhmi Chand. Dr. Rajendra Badgujar in his book argued that “if you want to know Haryanvi folklore then you have to read Mahashaya Dayachand Mayna. Apart from poetry, he is considered a freedom fighter for his service in the Indian National Army. Dayachand Mayna had many disciples including most famous Chajjulal Silana.