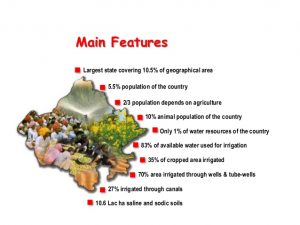 Global Rajasthan Agritech Meet was successfully organized from 9th to11 November, 2016 at Jaipur Exhibition and Convention Centre (JECC), Sitapura, Jaipur. During the event, 38 MOUs worth `4,400 crore have been signed for an investment in agriculture and allied sectors. Representatives of Netherlands, Iran, Kazakistan, Papuaanugini, Nigeria, Japan and other countries participated in the event besides the Israel participated as the partner country. Approximately 58,000 farmers participated in the event. During the event 5 conferences/ seminars were organized and 4 sessions at three places of Jajam Chaupal under the chairmanship and cochairmanship of central government/ state government ministers and renowned persons of sector concerned were also organized. All the participants including farmers, businessmen, academicians, scientists, students, educationists, researchers, etc accepted the usefulness of the techniques shown in the exhibition about agriculture,smart farm, animal husbandry and dairy sectors.

In order to provide better marketing facilities and adequate returns on farmers produce, the Directorate of Agriculture Marketing is functioning in the State to implement ‘Mandi Regulation and Management’ effectively.

Under ”Rajeev Gandhi Krishak Sathi Yojana” financial assistance for farmers /agricultural labourer and hamals have been increased from `1 lakh to `2 lakh in case of work side accidental death. `26.22 crore have been distributed to 1,938 farmers during the year 2016-17 upto December, 2016. “KisanKaleva Yojana” has been introduced for farmers to provide them quality food on subsidized rates in ‘Super’, ‘A’ and ‘B’ class krishi upaj mandi samities of the State. 19.16 lakh farmers and labourers have taken food in the market yards at subsidized rate from April to December, 2016. Oil testing labs have also been functioning in 21 selected krishi upaj mandi samities. During the year 2016-17, expenditure of `310.13 crore has been incurred on construction of mandi yards and roads etc., out of which `185.69 crore have been spent on construction of mandi yards, `124.44 crore on roads and its repairing upto December, 2016. Eight Agmark labs are being operated by the