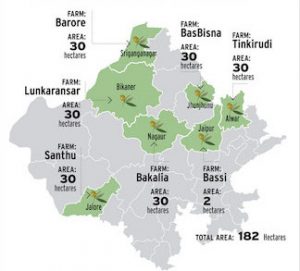 The salient features of Horticulture in Rajasthan are summarized below:

The strength of Rajasthan in respect of Horticulture crops.

Udaipur division is the leader in the State in the production of Custard Apple, Mango, Ginger, Ajwain, Turmeric, and Aswagandha and Kalonji.

Some of the other horticultural crops grown in Udaipur Division are :

The major contributions to the state’s horticulture crop production by the Udaipur division in 2016-17 were:

Rajasthan has large scope for development of horticulture. It provides additional employment opportunities to the rural people, while diversifying the rural economy to agro processing and other ancillary activities. Looking to the ample opportunities of horticulture development, a separate Directorate of Horticulture was established in 1989-90, with the objective of growth in area, production & productivity of fruits, vegetables, spices, flowers and medicinal plant crops in a planned way. During the year 2016-17, `444.92 crore is proposed under state plan, against which a sum of `119.18 crore has been utilized upto December, 2016. Establishment of fruit orchards in 58 hectare, plant protection measures in 2,812 hectare and 2,888 demonstrations of vegetables have been laid out under state plan schemes.

Under this scheme the districts of Karauli, Swai Madhopur, Udaipur, Chittorgarh, Banswara, Dungarpur, Sirohi, Baran, Jhalawar, Bhilwara, Rajasmand and Pratapgarh were taken up for promoting bamboo cultivation. For implementing this scheme in the year 2016-17, a provision of `2.90 crore has been made for new plantation of bamboo and maintenance of previous year plantation. Recently GoI has discontinued the scheme and only maintenance of previous year plantation is been

Looking at the consistent decrease in investments in agriculture and allied sectors the Central Government has introduced RKVY to draw up plans for agriculture sector more comprehensively, taking into account agro-climatic conditions, natural resource issues and technology. Under this scheme, the State level sanctioning committee sanctioned the horticulture development project worth `87.87 crore during the year 2016-17 and `12.72 crore have been utilized upto December, 2016.