Presenting the first e-Budget in the assembly where each legislator was provided an electronic tablet with details of the budget, Khattar tried to sell “foreign dreams” to the youth of the state by offering them free passports.

As per the scheme, all final year students in degree courses will get passports for free. Similarly, graduates of all industrial training institutes would also be provided free passports before leaving the institutes. This, according to the chief minister, is “to make the students aware of employment opportunities abroad.”

In another major initiative in the education sector, Khattar announced setting up of 4,000 play schools for children between three and five years of age for development of their “cognitive and intellectual abilities.” Similarly, the number of model schools would be increased from 21 to 119 — with a school in every block for those willing to study in English medium.

Haryana has also decided to establish around 1,000 more “bag-free” English medium primary schools. All 1,487 government senior secondary schools, where science faculty is available, will be converted into smart schools in 2020-21. The allocation for the education sector has is around 15% of the total budget, which is the highest ever after Haryana became a state.

In a special initiative, Khattar announced that from April 1, anyone providing information about potholes on roads on ‘Harpath App’ and if the potholes are not repaired by contractors in 96 hours, the complainant will get a Rs 100 incentive. This amount would be paid from the fine of Rs 1,000 per pothole/ daily recovered from the contractor for not repairing within time limit.
The government has also merged 132 schemes into 46 schemes, abolished 18 schemes and included 6 schemes in other departments.

The chief minister quoted Kautilya’s Arthashastra, Kalidasa and Upanishads in his budget speech while explaining his government’s responsiblities towards the welfare of public and as custodian of state treasury.

In Malaysia, the King has appointed seasoned politician Muhyiddin Yassin as the new Prime Minister.

The appointment came after this week’s shock resignation of Prime Minister Mahathir Mohamad, a move that plunged the country into crisis following a weekend of political wrangling and the collapse of the ruling alliance.

The announcement came hours after Mahathir struck a new deal to work with his former ruling alliance led by rival Anwar Ibrahim.

World Defence Day is celebrated on 1 March 2020. The day is observed to raise awareness of public protection from natural and technogenic disasters and rescue service work.

World Civil Defense Day was instituted by the International Civil Defense Organization (ICDO) General Assembly in 1990. It commemorates the day when the ICDO Constitution came into force as an intergovernmental organization in 1972.

ICDO was established by French Surgeon-General George Saint-Paul in 1931 in Paris. It was recognized by the French Parliament in June 1935 and in 1972 it achieved the status of an intergovernmental organization.

World economy faces worst performance since the past decade

Bank of America Corporation (BofA) economists stated that the world economy is heading for its worst performance since the 2009 financial crisis. The decline is due to the increasing spread of coronavirus across the world. The economists stated that they are expecting 2.8% global growth in 2020, which is the weakest since 2009. The forecast did not include a global pandemic that would basically shut down economic activity in many major cities.

Indian Railways has launched its first ”Restaurant on Wheels” at the circulating area of Asansol railway station for the use of passengers as well as the general public.

The Restaurant on Wheels was developed by refurbishing two over-aged MEMU coaches.

This unique effort will not only improve the facilities at Asansol station but will also generate non-fare revenue earnings approximately Rs 50 lakh in the next five years.

EKAM Fest aims to promote entrepreneurship among the Divyangjan community and raise awareness about the potentialities of Persons with Disabilities (PwDs). It provides an opportunity for all to encourage these products made with extraordinary determination by the divyang craftspersons and entrepreneurs.

Incredible India website project was launched by the Ministry of Tourism.
​​​​​​​

The promotional website aims to project India as a ‘must-visit’ destination across the globe.

Union Minister for Home Affairs Amit Shah inaugurated the National Security Guard (NSG) Regional Hub campus at Kolkata, West Bengal. It aims to provide adequate facilities to the brave NSG jawans. He also various welfare projects for NSG, amounting to over Rs. 245 crores, across Kolkata, Manesar, Chennai, and Mumbai. It will ensure to boost the capabilities of the force and raising the morale of the jawans. 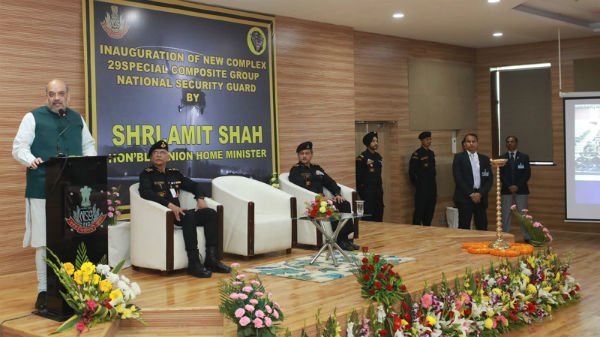