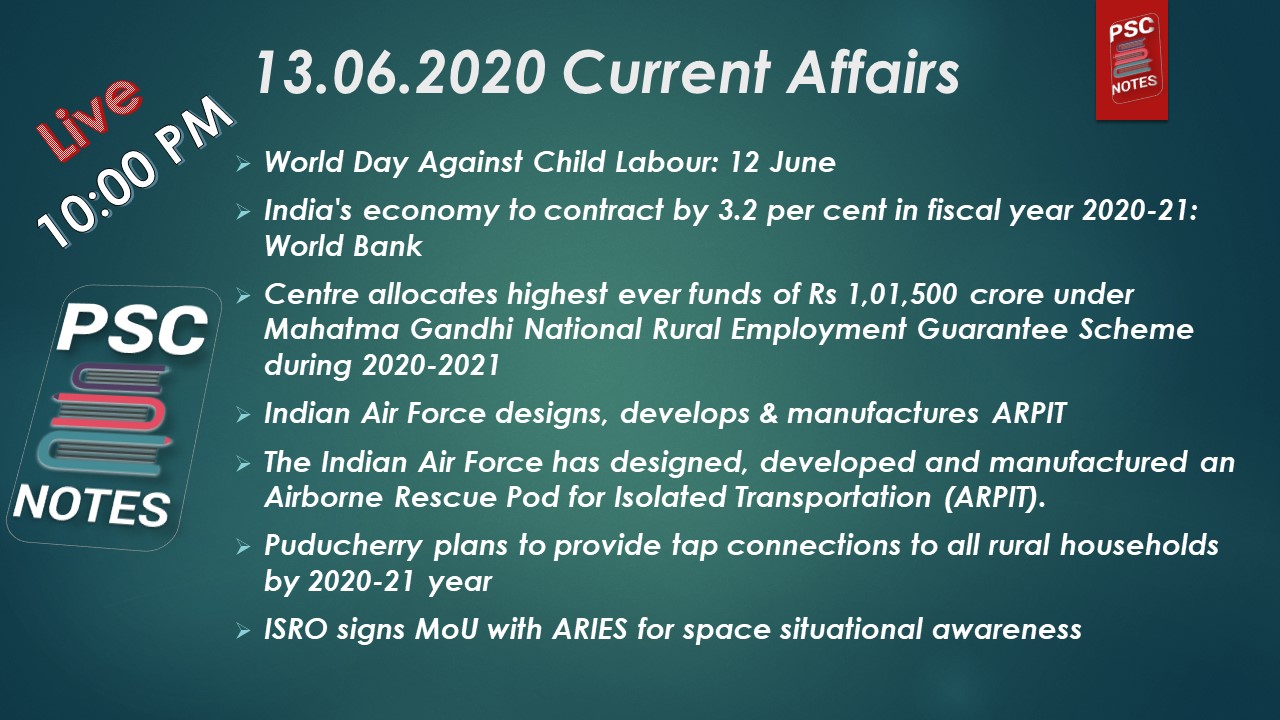 Every year on June 12, the World Day Against Child Labour is observed on June 12 in almost 100 countries all around the globe.

According to the International Labour Organization (ILO), there are about 152 million children globally who are engaged in child labour, 72 million of whom are in hazardous work.

The World Bank expects India’s economy to contract 3.2% in the current fiscal year, a sharp downgrade from its April projection of 1.5%-2.8% growth.

The latest report expects the economy to make a modest recovery to 3.1% growth in the next fiscal year.

A number of firms including Goldman Sachs and Nomura have projected a contraction of as much as 5% for India in FY21.

A provision of one lakh one thousand 500 crore rupees has been made under Mahatma Gandhi National Rural Employment Guarantee Scheme in the current financial year 2020-2021.

It is the highest ever provision of funds under the programme.

A sum of 31 thousand 493 crores has already been released in 2020-2021, which is more than 50 percent of the budget estimate of the current Financial Year.

This pod will be utilised for evacuation of critical patients with infectious diseases including COVID-19 from high altitude areas, isolated and remote places.

Requirement of an air evacuation system with facility to prevent spread of infectious aerosol from a COVID-19 patient during air travel was felt by IAF when COVID-19 was declared as a pandemic.

This indigenously designed system has been developed at a cost of Rs. 60,000 only, which is very less as compared to the imported systems costing up to Sixty Lakh.

The system has been developed as a lightweight isolation system made from aviation certified material.

To implement the plan, village-level planning has involved the local community despite COVID-19. Gram Sabhas are conducted in villages maintaining social distancing.

As per the plan, the local community will play a pivotal role in the planning, implementation, management, operation, and maintenance of water supply systems in villages to ensure long-term sustainability.

Local communities have been directed to provide due care also on greywater treatment and re-use.

Under Jal Jeevan Mission, water quality testing laboratories at different levels are being established in the UT.

It has been also planned to conduct Internet of Things (IoT) based sensor monitoring for water supply in villages.

Indian Space Research Organisation (ISRO) and Aryabhatta Research Institute (ARIES) have signed a Memorandum of Understanding (MoU) for cooperation in the field of Space Situational Awareness (SSA) and Astrophysics.

This MoU will make the way for future collaborations between ISRO and ARIES in setting up optical telescope observational facilities for space object tracking, R&D studies in space weather, astrophysics and Near-Earth Object (NEO).

The main objective of the MoU is to shield the Indian Space assets from the space debris’s conjunction threats and R&D of Astrophysics, solar sciences and space environment are the base for future space exploration projects and the key to progress in the Indian Space sector.