Although Haryana State is deficient in natural forests but it has rich bio-diversity, which makes it suitable for variety of wildlife particularly local and migratory bird species. Out of nearly 1250 bird species recorded in Indian subcontinent; approximately 500 species of birds are found in Haryana State. Wildlife is best preserved in their natural habitat. Wildlife wing of the forest department has adopted two pronged strategy for the Wildlife Conservation: protection and awareness generation. The department is giving emphasis on habitat protection as well as protection against poaching. The aim of wildlife conservation is being achieved through in-situ and ex-situ conservation strategies. For in-situ conservation of wildlife inside their natural habitat, 2 National Parks, 8 Wildlife Sanctuaries and 2 Conservation Reserves have been established in the state. As part of ex-situ conservation efforts breeding of Red Jungle Fowl is being done near Pinjore. Red Jungle Fowl in Shiwaliks of Haryana, is considered to be of pure breed, which is also verified by Center for DNA/Fingerprinting and Diagonostic (CDFD), Hyderabad. With the Gyps Vulture species on the brink of extinction, the department has established Vulture Conservation and Breeding Centre near Pinjore in collaboration with Royal Society for Protection of Birds (RSPB), Zoogical Society of London (ZSL) United Kingdom and Bombay Natural History Society (BNHS). The department has established deer park at Hisar and mini zoos at Bhiwani, Rohtak and Pipli to create awareness about wildlife conservation. A Peacock & Chinkara Conservation and Breeding Centre has been established at Jhabua Reserve Forest in Rewari district.

The Haryana state of north India has 2 National Parks, 8 Wildlife Sanctuaries, 2 Wildlife Conservation Areas, 4 Animal & Bird Breeding Centers, 1 Deer park and 49 herbal parks which are managed by the Forests Department, Haryana of the Government of Haryana.

In addition to the many birds, animals such as blue bull and black buck are also seen here. Trees which are popular with the birds like acacia nilotica, acacia tortilis, berberis and neem have been planted.

Corresponding to the considerable diversity of habitat types, the wild animals of Kalesar protected area show a good variety of species. Although numbers are rather low at present, due to the full protection provided by park authorities, the population will increase to the full carrying capacity of the area within few years. Among herbivores, Sambhar is common, especially in the more densely forested areas on gentle slopes, where groups of 2 to 4 are often seen. Chital is another common herbivore found in open grassy patches and fire lines. Barking deer is found especially in forest areas with ample ground cover. The Goral is found in the park occupying a specialized niche on the relatively bare rocky slope at the top of Shiwalik ridges.

Antelopes are represented by the Rojh (Blue Bull) bull which occurs in the more open areas bordering Yamuna plain. Wild boar is also fairly common in the park and it also raids on crops. Elephant is a occupational visitor from Rajaji National Park. Elephants use to stay at Kalesar Protected Area for few weeks and used to go back to Rajaji National Park. If good waterholes are made available, it may stay for longer duration.

The Rhesus macaque is most common monkey in the park and most of these were released in the park area from outside. Presently, their number is too high. These monkeys also feeds on eggs of Red Jungle fowl, so there is a apprehension that there is a decrease in Red Jungle Fowl number. Most of the time, these monkeys attack on villages and also go for crop raids. Among the carnivores in Kalesar protected Area, leopard take pride place. There are about 20-22 leopard in the entire Protected Area. The tiger is also an occasional visitor from Rajaji national park. It stays for few days and goes back. If there is increase in prey base, it can permanently stay in the park.

Bhindawas Wildlife Sanctuary and the nearby Bhindawas Bird Sanctuary  are located in Jhajjar district, which is about 15 km from Jhajjar town.

According to certain estimates, there are close to 300 species of birds to be found here. Usual suspects like egrets, storks, herons, ducks, geese, doves, babblers, bulbuls, barbets, ibises, hoopoes, kingfishers, cormorants, lapwings, drongos and various types of eagles and kites are easily visible.

It is also a good place to spot the Black Francolin, the state bird of Haryana along with other variants like the Grey Francolin.

Nahar Wildlife Sanctuary is situated in Rewari district of Haryana State, India. It is 36.9 km from Rewari. It is spread over an area of 211.35 hectares. It is 5 km away from Kosali on the Kosali-Mahendragarh road.

It is named Nahar because it comes under Nahar Village (Nahad village). Forests Department, Haryana of Government of Haryana officially notified this as Wildlife Sanctuary on 30 January 1987.

The Chhilchhila Wildlife Sanctuary  also known as Seonthi Reserve Forest, is located near Kurukshetra University in Kurukshetra district in the Indian state of Haryana. It is located in a depression which has a small lake created by an embankment. The sanctuary, as a staging and wintering ground of avifauna, has recorded (between April 2009 and March 2012) 57 species (33 winter migrants, 2 summer migrants and 22 resident species) of both resident and migrant wetland birds which belong to 37 genera and 16 families. Two species which have been classified Near Endangered have been identified in the sanctuary: the Oriental darter (Anhinga melanogaster) and the painted stork (Mycteria leucocephala).

Khaparwas Bird Sanctuary is a bird sanctuary in Jhaijar district, about 80 kilometres (50 mi) west of Delhi). The reserve covers 82.70 hectares. 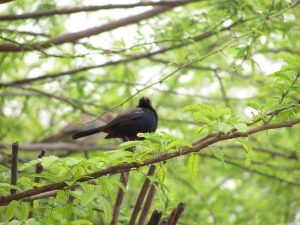 Saraswati Wildlife Sanctuary  also known as Seonsar Forest is situated in Kaithal district of Haryana State, India. It is spread over an area of 4452.85 hectares.

Kalesar National Park, Morni Hills and Saraswati Wildlife Sanctuary are respectively first, second and third largest forest in Haryana.  The Tribune reported on 9 April 2016 that Mahant and members of a dera of Nath yogis in the sanctuary found the ancient rectangular bricks from a 15 feet deep structure after an old banyan tree was uprooted. According to Rajendra Singh Rana, curator of Kurukshetra’s Srikrishna Museum, prima facie these bricks and structure appears to be older than 1500 years old as square bricks are associated with 1,500 years old Gupta period (320 CE to 550 CE) and these bricks are likely to be even older from the Kushan (30 CE to 375 CE) period as the Sarasvati river use to flow here.

There is also a 40 years old Water well made of small lakhauri bricks associated with the Mughal empire era.

Khol Hi-Raitan Wildlife Sanctuary is situated in Panchkula district of Haryana State, India. It is 0.5 km away from Panchkula on the Morni Road and its aerial distance from the Bir Shikargah Wildlife Sanctuary is only 3 km.  Khol Hi-Raitan Wildlife Sanctuary and Bir Shikargah Wildlife Sanctuary are only 3 km aerial distance from each other, both are also only few km away from Kalesar National Park, all of which lie in the Shivalik hills of Haryana. All these three centuries have similar species of wild animal that migrate from century to another. The wild species include Indian leopard, Asiatic elephant, Chital (spotted deer), Sambar deer, Wild boar, Rhesus macaque, Gray langur, Striped hyena, Indian jackal, Jungle cat, Indian gray mongoose, Indian fox and Indian jackal.

Bir Shikargah Wildlife Sanctuary  is situated in Panchkula district of Haryana state, India. It is spread over an area of 767.30 hectares. It also houses Vulture Conservation and Breeding Centre, Pinjore .

Bir Shikargah Wildlife Sanctuary and Khol Hi-Raitan Wildlife Sanctuary are only 3 km aerial distance from each other, both are also only few km away from Kalesar National Park, all of which lie in the Shivalik hills of Haryana. All these three centuries have similar species of wild animal that migrate from century to another. The wild species include Indian leopard, Asiatic elephant, Chital (spotted deer), Sambar deer, Wild boar, Rhesus macaque, Gray langur, Striped hyena, Indian jackal, Jungle cat, Indian gray mongoose, Indian fox and Indian jackal.

Haryana means ‘The Abode of God’. This was the place where the first hymns of the Aryans were sung and the most ancient manuscripts were written. The state is studded with century old monuments, temples, gardens, fairs and other attractions viz. adventure tourism.

Haryana state is endowed with a rich and varied bio-diversity distributed over a mosaic of different habitats spreadover the Shivalik Hills of the northeast to the Aravalli Range in the south and over Yamuna-Ghaggar plain in the east to semi-desert sandy plain in the southwest.

These varied habitats have been supporting a variety of animal and plant species ranging from thorny deciduous forest to pine trees. The species of fauna in the state include Black Buck, Panther, Nilgai, Fox, Jackal, Dear, wild dog, Parrots, Peacock, Pheasants etc. More than 300 species of birds are found here.

The Department has adopted entirely a new approach in tourism. The programs are preserving travel to natural areas to appreciate the cultural and natural history of environment, taking care not to disturb the integrity of ecosystem, while creating economic opportunities that makes conservation and protection of natural resources adventageous to the local people.

These Eco loges have been equipped with eco-friendly furniture, roof hangings crafted from bamboos and natural flora which take you further close to local systems and traditions.The tents and tree houses at Thapli , Morni and chucharpur are well equipped with modern day amenities. These accommodations are surrounded by useful herbs/herbal gardens, water spots and also have workshop & seminar holding facilitates.

The Nature Camps in Haryana ( Thapli , Morni , Ban Santor , Chuharpur ) enable you to have an wholesomely satisfying natural view of all rich and healthy pollution free natural environment.Unlike the milieu you get at a luxury hotels, Eco lodges, Tents and tree huts let you dwell at a typical jungle ambience and give a feel of being in the lap of nature.These Eco lodges and tented lodges give you an exotic and natural view of several flora and fauna while feeling yourself to realize a unique and long lasting sweet experience.

The scenic beauty of morni Hills is unmatched. Exploring this tiny hill station and its natural surroundings is worth making one’s Eco vacation extremely enjoyable.The whole beauty of  Kalesar  (Yamunanagar) is assembled in its untouched serenity and virgin bank of Yamuna river, which is full of offering diverse range of Eco-adventures. Visit to National Park gives a complete feel of nature with flora and fauna. One of the most famous nature Camp in north India known for its medicinal plant base is Herbal Park Chuharpur(Yamunanagar). It lets visitors indulge into many eco and recreational activities like nature walk in splendour herbal park, lake-boating, yoga and meetings in natural surroundings.

Serene and dense forests offering amazing wildlife view are some of the embedded geographical features of Ban Santor.You can have a picturesque view while sitting in the lap of nature at the heart of virgin, lush forests.  Forest department is still continuing the efforts and have planned some more recreational activities like indoor and outdoor games, yoga & Ayurveda centres etc.