In India, animal husbandry and dairying are important economic activities accounting for approximately 33 percent of the agricultural Gross Domestic Product (GDP). India is the largest producer of milk having achieved an annual production of 146.3 million tons in 2014-15. As the economy grows and income increases, a World Bank study points out, per capita consumption for milk and milk products in the country is projected to rise to more than 350 grams per day by 2020.

Haryana, in the above context, is a progressive state in Northern India wherein the livestock sector contributes approximately 35% to the state’s agricultural GDP. The state has the pride of being the home tract of famous breeds of “Hariana” and “Sahiwal” cows and “Murrah” buffaloes (the latter also known as ‘Black Gold’). The state has long been the prime source of ‘Murrah’ germplasm for other states of the Indian Union and abroad to upgrade low yielding non- descript buffaloes. The state has a robust network of milk cooperatives led by a dairy federation – Haryana Dairy Development Cooperative Federation (HDDCF) formed in 1970. Possessing 2.5% of the country’s bovine population (with approximately 6.1 million buffaloes and 1.8 million cows), the state’s milk production in 2015-16 was 8.4 million tones. The per capita per day availability in 2014-15 was 805 grams as against a national average of 322 grams.  Exotic cattle (Jersey, Holstien Fresien and Cross Bred), indigenous cattle (Hariana, Sahiwal, Tharparkar) and Buffaloes (Murrah, Nili Ravi) have together contributed to such milk production and its availability in the state.

The Government of Haryana is giving a lot of impetus to the conservation, preservation and development of the state’s approximately .81 million indigenous breeds of buffaloes and cows, their genetic resources, health and nutrition. To encourage farmers to rear such breeds, a program of awarding incentive money (ranging from US $200 to US $300) linked to peak milk yield has been recently launched by the state government. Besides, to encourage farmers to set up mini dairy units of 5/3 indigenous cattle, a subsidy of 50% of the unit cost is being be provided to the beneficiaries.

The Haryana Dairy Development Federation, in addition, has recently taken the initiative to make available to the citizens ‘A2 pasteurized indigenous cow milk’ that has the qualities of being rich in sources of minerals, boosts good cholesterol, enhances immunity, is quickly digestable and is a rich source of B- carotene. The centrally funded ‘National Program for Bovine Breeding’ (NPBB) and the ‘Rashtriya Gokul Mission’ (RGM) supplement the state’s own efforts in development and conservation of indigenous breeds through strengthening /extension of field artificial insemination network, field performance recording and control of infertility among bovines in both urban and rural areas.

Besides the above initiatives, Haryana is also implementing three NDP 1 sub projects (namely production of high genetic merit bulls through progeny testing and pedigree selection as well as strengthening of its major sperm station) for genetic improvement of the bovine stock. A risk management and livestock insurance program is already in effect wherein the owners of animals pay only US $1.5 and US $0.4 insurance amount for large and small animals respectively.

Efforts are also underway to introduce a scheme for pre-conception selection of gender in livestock to leverage the economic advantage of female calves over breeding bulls. An e-market portal for bovine germplasm in the state is also being planned as a single window platform to connect farmers and breeders. Besides, to tide over uneven supply of green fodder (that is critical in supplementing availability of abundant dry fodder), mixed concentration ration is being promoted to check mineral deficiencies. Such deficiencies result in low productivity and prolonged inter-calving period leading to an economic burden on the owners of the bovines. This is being complemented with provision of quality fodder seeds and silage making units during the lean season.

The aim of all the above measures is to maximize disease free per head productivity of cows and buffaloes in the state through genetic improvement, mineral supplementation and hormonal therapy. This, in turn, would enable realizing the goals of not only increase in milk production but also production of clean milk through scientific management of production units, be it through mini or medium sized dairies. Autonomous end implementation agencies such as the Haryana Livestock Development Board (HLDB) are working in tandem with the State Government as well as registered ‘Gaushalas’ (cow ranches), run by nongovernmental organizations, to ensure last mile backward and forward linkages in the field.

It goes without saying that the state is committed to strengthening the already sound infrastructure of veterinary dispensaries, hospitals, polyclinics, static as well as mobile surveillance diagnostic labs, vaccine production institutes, semen production stations etc that exists in the field. However, one key critical issue that needs undivided attention is identification and registration of each bovine to ensure a reliable database to plan for the future. The latter is critical for purposes of traceability, accurate analysis of production profiles and reproductive efficiency assessment in the field. 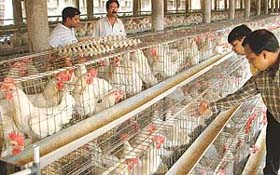 With the national average ‘in milk yield’ across lactating buffaloes at 4.7 kg/day and cows at 3.4 kg/day, the bigger challenge for India, a World Bank study states, is matching or surpassing the world average of 6.3 kg/day. Interestingly, in Haryana, the average ‘in milk yield’ of indigenous cows and buffaloes is 5.5 kg/day and 7.5 kg/day respectively. It is 8.9 kg/day for exotic bovines in the state. The World Bank study further observes that the focus in genetic improvement has to shift from crossbreeding to indigenous breeds. For the latter, through production of high quality semen coupled with door-to-door artificial insemination services, the strong foundation for increased milk production can be built.

1.Scheme for the conservation and development of indigenous cattle (Gausamvardhan) 2016-17 :

This scheme is being implemented by the department in the State with the objective of conservation and development of the indigenous breeds of cows. It is a continued scheme for which an amount of Rs. 400 lacs has been provided in the Annual Plan 2016-17. As per 2012 census, the State has livestock population of 89.98 lakh out of which 18.08 lakhs is cattle. Out of total cattle population, 8.12 lakhs are indigenous cattle and 9.96 lakhs are exotic/cross bred cattle. Lack of concerted efforts towards genetic improvement of the indigenous cattle breeds have contributed to their gradual decline. The population of indigenous cattle has reached an all time low and urgent measures are required for conservation and development of these indigenous breeds. Being the home tract, the State is under moral, social and national obligation to undertake integrated development of Hariana and Sahiwal breed of cattle.