ð Solar power tariff in the country has fallen by 80% since 2010. The maximum tariff for solar power was seen in December 2010 when 150MW was sold at Rs 12.76 per unit under the Jawaharlal Nehru Solar Mission. Since then, the tariff has fallen steadily with the lowest tariff of Rs 2.44 per unit for 500MW in Rajasthan.

ð The solar power tariff has been falling only when the states or agencies go through the bid mode. Tamil Nadu which followed the power purchase agreement does not figure in the list of states that took advantage of falling solar power tariff until 2015. 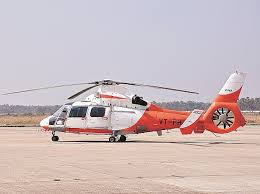 have partnered to launch HeliTaxi services from Bengaluru Airport.

ð The helicopter service will initially be launched from Bengaluru Airport to Electronic City and gradually expanded to other parts of the city.