Nanda dynasty, family that ruled Magadha, in northern India, between c. 343 and 321 BCE. The Nanda dynasty immediately preceded the dynasty of the Mauryas, and, as with all pre-Maurya dynasties, what is known about it is a mixture of fact and legend. Indigenous traditions, both Brahmanical and Jaina, suggest that the founder of the dynasty, Mahapadma (who was also known as Mahapadmapati, or Ugrasena), evidently had a low social origin—a fact confirmed by classical scholarship. Mahapadma took over from the Shaishunagas not only the reins of Magadhan power but also their policy of systematic expansion. His probable frontier origin and early career as an adventurer helped him to consolidate the empire with ruthless conquests. The authenticity of the Puranic statement that he was the “destroyer of all Kshatriyas” and that he overthrew such disparately located powers as the Ikshvakus, Pancalas, Kashis, Haihayas, Kalingas, Ashmakas, Kurus, Maithilas, Shurasenas, and Vitihotras is borne out by independent evidence, which also associated the Nandas with conquests in the distant Godavari River valley, Kalinga, and part of Mysore.

Maha­padma Nanda, the founder of the Nanda dynasty, proved to be a powerful ruler. From both the Buddhist and Jain sources we come to know that he belonged to very low family. Probably, he was born of a Sudra mother, as the Buddhist sources would inform us. Whatever may be the origin of this man, it is quite certain that he greatly extended the boundaries of the Magadhan Empire. He is said to have uprooted all the Kshatriya ruling dynasties of Northern India like the Panchalas, Kurus, Asmakas, Ikshvakus and Surasenas, etc., and annexed their states.

After Mahapadma Nanda his eight sons divided the whole empire among them and ruled simultaneously for twelve years from different centers. Nothing definite and in detail is known about them except that when Alexander invaded India in 326 B.C. Magadha was ruled by Dhana Nanda who was known all around for his immense wealth and powerful army. According to the Greek writers the army of the Nandas consisted of 20,00,000 infantry, 20,000 cavalry, 2,000 four-horsed charioteers and 30,000 elephants. From the Buddhist texts we come to know that the Nandas were very fond of wealth and had become very unpopular because of their heavy taxes and undue exaction from the public.  It was because of this that people deserted them and helped Chandragupta Maurya when the latter attacked Magadha in about 323-322 B.C. 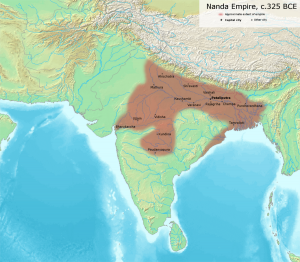 King Dhana Nanda inherited the vast empire of his father. The army of Emperor Dhana Nanda consisted of large number of cavalry, infantry, chariots and elephants. When Alexander the Great invaded India, the ruler of Magadha Empire was Dhana Nanda. Alexander and his army heard the glory of the army of Nanda Empire. The Macedonian army was so frightened that the they refused to move ahead to face the huge army of Magadha Empire.

Apart from his vast empire and great army, Dhana Nanda amassed huge wealth. He was huge mass of gold reserves. It is said that he built his treasure house by causing a great excavation in a rock in the bed of the Ganges. He gathered wealth by levying taxes on skins, stones and various articles.

The revolution which brought the end of the Nandas was not a bloodless revolution. There was violent encounter between the Nanda army led by general Bhaddasala and the army of Chandragupta in which the latter became victorious. The fall of the Nandas paved the way for the rise of the Maurya Empire.

The Nanda Empire was extended upto Kalinga. The southern frontier of the Nanda Empire did not limit itself to Kalinga. It extended over to the Asmaka country in the Godavari valley in Deccan.  Whether the Nanda Empire extended still further beyond the Krishna, is not definitely known. But the discovery of Asokan edicts in Kurnool and Chitaldrug districts point to the extension of the Magadhan Empire up to the south of the Krishna. Since Asoka was not responsible for the conquest of these areas, it is inferred that the credit of the conquest of the area must go either to the first Maurya or the first Nanda.

Several Mysore inscriptions of later date refer to the inclusion of the Kuntala lying to the south of Mumbai within the Nanda Empire. But the validity of the information is doubtful.

The Nanda Kings established a strong monarchy based on an efficient bureaucracy and a mighty army. The conquests made by the Nandas paved the way for the political unification of India under the Mauryas. The age of the Nanda Empire was significant also for the fact that it brought an end to the immemorial orthodox tradition of the divine right of the Kshatriyas to hold the royal power.  Mahapadma Nanda was the founder of Nanda Empire. It is believed that his mother was a Shudra. The new ruler Mahapadma Nanda was a representative of inferior Sudra caste and a “destroyer of Kshatriyas”. He was a product of the prevailing spirit of revolt against all conservative traditions both in religion and politics.

If Buddhism and Jainism challenged the orthodox Brahmanical religion, the rise of a Sudra chief named Mahapadma Nanda on the throne of Magadha signified a spirit of revolt against traditional Kshatriya domination.  The Nandas built canals and irrigation projects for increasing the fertility of the land. Magadha was prosperous for iron ores which she could steadily get from her mines. The vast army of the Nandas could be well equipped with suitable weapons due to abundance of iron supply. The agriculturists could get plough shears and implements.