Under Development of Sports Infrastructure, 15 Stadiums at Distt. Level and 8 stadiums have been constructed at Block/Tehsil Level. In addition five Gymnasium Halls, four multipurpose halls, ten swimming pools and seven Yogacum-Badminton Halls, one synthetic track in “Ch. Charan Singh Haryana Agriculture University, Hisar (CCSHAU) and one Hockey Astro-Turf in Nehru Stadium, Gurgaon has been completed. Laying of Astro Turf at Shahbad, Kurukshetra is being completed. In addition to this, HUDA has completed sports complex in sector 3 Panchkula, providing the facilities of Cricket Pavilion & Athletics Stadium, Volleyball, Basketball Ground and Badminton Hall. A Sports complex is being developed in Sector-38, Gurgaon by HUDA, out of which work of play fields of Cricket & Athletics Track have been completed. A sports complex of an International standard has been completed recently at Faridabad in collaboration with the Government of India at a cost of Rs.8.43 crores. Efforts have been made by State Government to provide sports infrastructure for the development and upliftment of sports in the State. Hon’ble Chief Minister has approved two big projects which are as follows:-

Kapil Dev Nikhanj born 6 January 1959), better known as Kapil Dev, is a former Indian cricketer, often considered one of the greatest cricketers of all time. 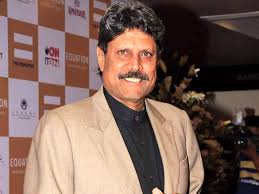 He captained the Indian cricket team which won the 1983 Cricket World Cup. Named by Wisden as the Indian Cricketer of the Century in 2002, Kapil Dev is considered as one of the greatest all-rounders of all time. He was also India’s national cricket coach for 10 months between October 1999 and August 2000.

Kapil was a right-arm pace bowler noted for his graceful action and potent outswinger, and was India’s main strike bowler for most of his career. He also developed a fine inswinging yorker during the 1980s, which he used very effectively against tail-enders. As a batsman, he was a natural striker of the ball who could hook and drive effectively. A naturally aggressive player, he often helped India in difficult situations by taking the attack to the opposition. Nicknamed The Haryana Hurricane, he represented the Haryana cricket team in domestic cricket.He retired in 1994, holding the world record for the most number of wickets taken in Test cricket, a record subsequently broken by Courtney Walsh in 2000. At the time, he was also India’s highest wicket taker in both major forms of cricket, Tests and ODIs. He is the only player in the history of cricket to have taken more than 400 wickets (434 wickets) and scored more than 5,000 runs in Tests, making him one of the greatest all-rounders to have played the game. On 8 March 2010, Kapil Dev was inducted into the ICC Cricket Hall of Fame.

Sakshi Malik (born 3 September 1992) is an Indian freestyle wrestler. At the 2016 Summer Olympics, she won the bronze medal in the 58 kg category, becoming the first Indian female wrestler to win a medal at the Olympics and the fourth female Olympic medalist from the country. She is a part of the JSW Sports Excellence Program, along with fellow female wrestlers Vinesh Phogat, Babita Kumari and Geeta Phogat. Malik had previously won the silver medal at the 2014 Commonwealth Games in Glasgow, and the bronze medal at the 2015 Asian Wrestling Championships in Doha.

Geeta Phogat (born 15 December 1988) is a freestyle wrestler who won India’s first ever gold medal in wrestling at the Commonwealth Games in 2010. She is also the first Indian female wrestler to have qualified for the Olympic Summer Games.

Yogeshwar Dutt (born 2 November 1982) is an Indian freestyle wrestler. At the 2012 Summer Olympics, he won the bronze medal in the 60 kg category. He was awarded the Padma Shri by the Government of India in 2013. He won a gold medal at the 2014 Commonwealth Games.

Yuzvendra Chahal (born 23 July 1990) is an Indian cricketer who plays for Haryana in Indian domestic cricket. He is a leg break bowler.  Chahal is the only person to represent India in chess and cricket. Chahal is one of only two players in T20 Cricket history to have taken a 6 wicket haul. He also plays for Royal Challengers Bangalore in the Indian Premier League. He was selected in the squad for the three match T20I series against England in 2017.He was the part of Indian Under 16 chess team.

Vijender Singh Beniwal (born 29 October 1985), better known as Vijender Singh is an Indian professional boxer and the current WBO Asia Pacific Super Middleweight Champion and WBO Oriental Super Middleweight Champion from Kaluwas, Bhiwani district in Haryana. He was educated in his village, after which he received a bachelor’s degree from a local college in Bhiwani. He practised boxing at the Bhiwani Boxing Club where coach Jagdish Singh recognised his talent and encouraged him to take up boxing. He was coached by the Indian Boxing Coach Jagdish Singh.

Sushil Kumar Solanki (born 26 May 1983) is an Indian freestyle wrestler. Competing in the 66 kg weight division he won the 2010 world title, a silver medal at the 2012 London Olympics and a bronze medal at the 2008 Beijing Olympics, which made him the only Indian to win two individual Olympic medals. His 2008 Olympic medal was second for India in wrestling, and the first since Khashaba Dadasaheb Jadhav’s bronze medal at the 1952 Summer Olympics. In July 2009, he received the Rajiv Gandhi Khel Ratna – India’s highest honour for sportspersons. On 3 October 2010, Kumar handed the Queen’s Baton to Prince Charles in the Queen’s Baton Relay for the 2010 Commonwealth Games Opening Ceremony. Sushil won the gold medal in the 74 kg division at the 2014 Commonwealth Games.