Languages and Literature of Haryana

The main languages spoken by the people of Haryana are Haryanvi, Hindi, Punjabi, Urdu and English. Many dialects have originated, which are spoken throughout the length and breadth of Haryana. However, almost all of them have their base in Hindi with a smattering of Urdu and Panjabi thrown in for good measure.   In towns and cities, English is still to be adopted as the household language. It is spoken in a hazy mixture of Hindi. The most striking feature of Haryana is its language itself; or rather, the manner in which it is spoken. Popularly known as ‘Haryanvi’ (or as Bangaru or Jatu), it is actually a bit crude.

Haryana is a unique state in terms of literary activities as well. It was this land only where The Bhagwat Geeta was not only spoken but also written here. It wnt be wrong to say that all the Hindus owe their most sacred religious book i.e The Geeta to the land of Haryana.It gives us the ultimate Philosophy that every human being can adopt to relieve himself off the agonies of birth and death. It is the supreme sermon of Lord Vishnu,which must be read and imbibed in letter and spirit. The Bhagwat Geeta is the most widely read and revealed religious text of the world. The state of Haryana is proud of the fact that this legendary epic was orated by Lord Krishna at Jyotisar.kurukshetra, which is located here.Further, it was also compiled by Ved Vyasa on the bank of the river Saraswti, which was once a perennial river of this state. Hence, the greatest pholosophy of life is associated with Haryana because Lord Krishna had given the supreme semon to arjun on this land.

The poem is long poem, which, in fact, describes the gist of life,Karma, and dutiesof an individual.Lord krishna narrates to Arjuna how he should do his duties and became a part of the ultimate should do his duty and became a part of ultimate soul. This poem forms the sixteen chapters ( Adhyayas) of the Mahabharata written by Veda Vyasa. It is in the form of Sanskrit hymns (shlokas). The entire Epic is written in Sanskrit,the language of the Aryan race during tha historic times.It is the longest epic of the world. 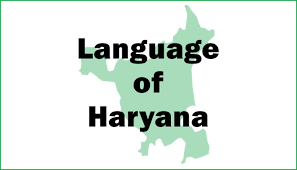 It is believed that Chand bardai and Surdas were the products of Haryana.Chand bardai became immortal by writting Pritvi Raj Raso while Surdas wrote Sur Sagar. Further Sant Haridas , Kavi Maldev, Jain poet Sunderdass,Nischal Das ,Banwari Das , Kavi Ummed etc are famous literateurs of hindi language.These sages and port have enriched hindi literature to the maximum extent with the help of their literary work. Among the Muslim saints, the nemes of Sheikh Abdul Qadoos, Sannat Sadullah, Sheikh Bahaudin Chisti, Nur Mohammad and Jan Kavi Jisno may be recalled. These poets and writters wrote in Brig and Hindi and contributed to the world of Hindi Literature.

During the rule of the british, the residents of the unified state of Punjab struggled to liberate the nation from the clutches of the britishers.So, the literary activities activities suffered a setback for this time. However one poet of Urdu, made his mark during this period, his name was Khwaja Altaaf Husain Haali.He was a famous poet, prolific scholar and Urdu critic, born in District Panipat of Haryana. He had a good knowledge of Urdu, Persian and Arabic. His prose and poetical work were Tiriya ke Masmoon, Majaalis Ulnisa, Mazaamine-e-Haali, Haayaat-e-Saadi, Muqadam-e-Sher-o-Shairi,Yaadgar-e-gaalib, Deewan-e-Haali, and Roobaiyat. His work Muqadam-e-Sher-o-Shairi,Yaadgar-e-gaalib,written as a preface to his collection of poetry.Mohammad Sarwar caled it “the first menifesto of Urdu poetry”. In all he composed116 gazals which consist of about 1300 shers.

Deedar Singh, Bhai Santokh Singh, Sahib Singh Mrigendra,Bagg Singh, Ujjawal Singhand Joginder singh are some of the literary personalities of Haryana. They wrote in hindi, punjabi and urdu. Bishambar Nath Kaushik was born in Ambala cantonement. Pt. Neki Ram Sharma was from Bhiwani who started the magazine Sandesh in Hindi. Tulsi Ram Sharma from Bhiwani wrote Shyam Satsai and Satyagrahi,Prahlad.The first ever state poet was Uday Bhanu Hans. Bhai Parmanad was a renowed poet from Hissar, also took active part in Bhoodan Movement. Geminey Haryanvi contributed to Haryanvi Literature. He wrote couplets and and poems. Thus we can say that History of Haryana is full of valuable literature.