Handicrafts of Haryana mainly include Pottery, Embroidery and Weaving, Phulkari, Chope, Durries Bagh and Paintings. Most of these are essentially village handicrafts. The Villages of 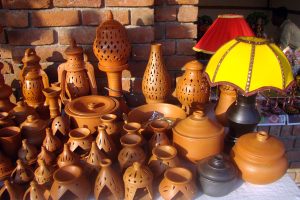 Haryana are most famous for their woven works. The Haryana Shawl, an offshoot of the Kashmiri style of work, is a magnificent piece of art. Bright and brilliant colors form an essential part of the Arts and Crafts of Haryana.

The pots made in the villages of Haryana are brightly painted and designed intricately. This makes them appear very attractive. While the men make the earthen article the patterns on them are generally painted by some woman member of the family. Phulkari of Haryana is essentially a rural craft and in made by the women members. The Bagh is a bit different from the Phulkari and in this case the base cloth is completely covered with embroidery. Another kind of shawl made by the people here is the Chope.

Haryana Arts and Crafts are one of the major mode of income for the rural people of the state. Thus they play an important role in governing the economy of the state of Haryana.

Pottery is one of the most popular occupations in the rural parts of Haryana. Since the state mainly has a rural economy so this popular form of craft is considered with much importance in Haryana. The unique feature of the earthenwares of this state is that they are painted with rich and bright colors.  Pottery involves a main potter and a helper who will help him to prepare the mix. These works are generally done by the men of the village. After these earthenwares are given shape, bright and colorful patterns are painted on them. This work is generally done by a female member of the potter’s family. Thus Pottery in Haryana involves a collective effort of many people. 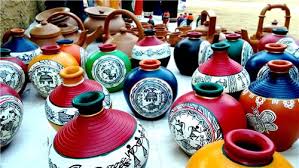 Pottery is popular in many corners of India. The origin of the potter’s wheel can be traced back to the pre-Aryan days. They are of different kinds and shapes. The Kick- operated type is popularly used in the villages of Haryana. In this case the potter needs not use his hand for the work rather they use their foot to turn the wheels. But the hand operated wheels are more common in the other parts of the country. The wheel is made of either cement or stone.

Haryana is famous for its Handlooms, The shawls, lungis and Durries are the most popular among them. The Haryana Shawl known as Phulkari is appreciated all over the world for its rich Embroidery. Though it is very similar to the Kashimiri style but the Phulkari of Haryana is unique in its use of colors and patterns.   The Phulkaris are worn by the women of Haryana with their Ghagra and Choli during the winters. Another type of shawl very similar to the Phulkaris is the Bagh. Intricate embroidery is the main feature of this branch of Handlooms. Almost the entire base cloth is covered with embroidery in the Bagh styled shawls.  Phulkari and Bagh are essentially products from the rural parts of the state of Haryana. Phulkari is done by the women population of some of the villages and it generally take years to complete one such piece. Weaving starts after the birth of a girl in the family and its completed to be given as a wedding present to her.

This design almost always follows a geometric pattern, with green as the basic colour probably because mainly Muslims worked on them. Although lacking in technical finesse, it makes up for the loss by a colourful display of its design. Everything goes into its design – elephants, houses, crops, the sun, the moon, kites, gardens, anything and everything. The embrodiery is worked into khaddar (coarse cotton cloth) with silk thread. Khaddar is cheap and locally available everywhere in India, and in making a bagh narrow pieces are used. Sometimes two or three baghs will be stitched together to for a phulkari.

Another kind of shawl is the Chope, a rather simple affair in comparison to the phulkari and bagh, and is presented to a new bride by her maternal grandmother. The darshan dwar shawl is gifted to a temple by a devotee whose wish has been fulfilled.

Durries  Haryana durries are rather coarse, although spectacular geometric designs adorn the entire rug. The Jats of Haryana are known to make durries with white triangles often set against a blue background. In Haryana, durrie making is concentrated in and around Panipat. Karnal is a hot spot for bright robes and lungis (a skirt-like garment worn by men and originally invented by Gautam Buddha), a common garment worn by inhabitants of rural India.

Rock and stone were the most common subjects for the development of art, right from the Maurya period to Harshavardhana to the Mughals and the British. However, the Mughals put a stop to carving idols and images out of rock as this was against the very basis of Islam. They went a step further, destroying temples and any such figure which crossed their path. Sculpture in Haryana was concentrated around centrtal and northen parts and was basically religious in content. Vishnu was the most important, and he and his incarnations were enough material for sculptors to start cutting away. A figure of Vishnu found in Kurukshetra is a remarkable piece of art, showing the god with four arms gracefully reclining on the coils of Anantnag, the many-headed snake. This stone figure was probably made in the 10th century AD. Gods formed the basis of sculpture in ancient Haryana, and likewise all over India. Sandstone was widely used, be it green, buff, grey or black. But besides the images of Hindu gods and goddesses, Jain images from the Pratihara period (9th century) have also been found, all made of sandstone. The Buddha also surfaces once in a while, like in Rohtak where he was found seated cross-legged on a lotus pedestal and made entirely of grey stone.

Haryana was always a rendezvous for various tribes, invaders, races, cultures and faiths, going right back to BC 2500, and it witnessed the merging of numerous styles of painting. While references to paintings are to be found of the Aryan period, art actually flourished during the reign of the Guptas (5th century BC to 6th century AD). The Persian style infused with script also gains prominence, especially with murals in which the Persian script is freely used. Elaborate detail forms the central theme within which verses from the Koran are written in various flowing styles, following the calligraphy method.