The Folk songs of Haryana/music generally falls in to two categories:

Classical form: The group song that is closely linked with the classical form of singing comes under this category. The themes of such songs are usually mythological. Allah, Jaimalphalla, Barahmas, some Teej songs, Phag and Holi songs belong to this group.

Country side music: This group includes legendary tales, such as Purana-Bhagata, ceremonial songs, seasonal songs, ballads etc. Its music survives in cross-cultural traits of social rapport. In such songs Jai Jai Vanti, Pahari, Bhairavi, Kafi, Jhinjhoti and Bhairav ragas are used. Raga Pilu is also used in some songs sung by the Ahirs, using a scale with twelve semi tones. The main credit for popularizing folk music in Haryana goes to Jogis, Bhats and Saangis. The Jogis use Sarangi as an accompaniment  to their songs. They are proficient  in using Allah, Jaimal-phatta and other heroic ballads with their rich melodies and resonant-appealing voice.

The seasonal songs of Teej and Phalgun resemble the popular Kajri and Jhula of Uttar Pradesh and Chhatisgarh and the Jhuman songs of Rajasthan. The melody of the rainy season has always been a familiar theme for the poets and singers. Such songs express the feelings of lovers of nature whose hearts beat in unison with the rhythm of rain. The poet sings of the changing phases in life, the coming of the bride, separation of lovers, the rain which breathes new life into the parched earth, and so on.  Such songs are widely sung and may be heard in Haryana village.

As the rainy season commences, swings are hung from the branches of neem, mango or pipal trees and young girls and bridges gather together to sing and make merry. The climax is reached on the Teej when the whole atmosphere resounds with sweet melodies.

Phag is a seasonal dance by the farmers, expressing the joy of bounty crop.

There is a great variety of musical instruments which are an essential accompaniment of folk music. Most of these are common to the whole of Northern India. Broadly these fall into three categories: stringed, wind and percussion instruments.  Iktara: This is a one stringed instrument which is played with the fingers. It is made from a piece of bamboo about a metre long with a large gourd attached to one end. The other end of the stick is inserted in to the hollow of the gourd resonator which is covered with hide. Before singing, the singer hums gently feeling for the right pitch. The sound of the string keeps the drone of his basic note. This instrument is generally used by Jogis. 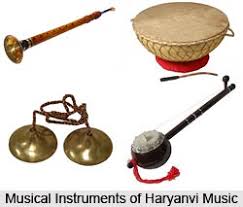 This is like a two stringed Iktara and serves the same purpose.  Sarangi: This is a bow instrument because it is played with a bow, which is made of long strand or strands and takes a prominent place as accompaniment to the main singer. It is about 60 cm long made by hollowing out a single block of wood. For tuning, four pegs are fixed in it, to set the strings according to the pitches of twelve-semi-tones. Some Sarangis have thirty-five to forty sympathetic strings running under the four main strings. It has been a folk instrument used by the common people, particularly the Bards for their simple music. In the seventeenth century, the Sarangi was considered suitable accompaniment to the new style of classical music. In Haryana, this instrument is seen with some wandering Bards as an accompaniment to singing their folk songs. It is also used during a Swang performance.

This is mostly used by snake charmers. Two small bamboo pipes are fixed in a hollow gourd. One keeps the drone of the basic note, producing a monotone and other one is used for producing tunes by the performer. The player blows into the gourd and his fingers move smoothly on the finger-holes of this double-reed instrument. It is used in many folk dance performances.

This is one of the earliest wind instrument called by many other popular names like veena and murali. Seven round holes are bored in a hollow piece of bamboo stick. There are several verities of this instrument. Some are held straight away from the face while others are held transversely, parallel to the eye-brows as it was used by Lord Krishna.

This is a smaller version of Dhol, mostly used by the Ahirs of Gurgaon district.

This is a one sided drum and serves as accompaniment of dances particularly Dhamal dance which is popular in Mahedargarh district. It is very simple in construction consisting of an open circular frame with only one side covered with skin. It can be played either by hands or with small sticks. It is also used on festive occasions with Folk songs of Haryana.

This is a small variety of Daph with the only difference that the Ghungrus (bells) are fixed around it. It is generally used in a solo dance performance Folk songs of Haryana.