Fairs and festivals of Haryana

The state of Haryana celebrates the rich, glorious culture of India in its various fairs and festivals that are celebrated with equal pomp and gaiety here as all over the country. There are several fairs and festivals in Haryana that attract a large number of visitors to the state at different times of the year. These festivals are occasions of celebration, fun and frolic when the entire state of Haryana bustles with life.

Each year during the month of February, the department of Haryana Tourism organizes a cultural fest, which is popularly known as Surjakund Fair. It is celebrated no less than any big festival in Haryana and the sole motive behind organizing this fair is to promote the traditional art and talent that exist in our country. People from different cities and countries come here to mark their presence and witness the richness of traditional Indian crafts present in this grand fest. Beautifully deco

rated stalls belonging to different states showcase and present the specialty of the state they are respectively representing. Visitors can be found bargaining with the shopkeepers, while buying the souvenir items that they would like to purchase for themselves from the fair.  The traditional touch in the collection of exemplary handmade items and handlooms sparks up the beauty of entire Surajkund Fair, Faridabad. Pieces of creative craft work made up of wood, bamboo, glass, metal, iron and textile can be seen displayed all around. The artistry and hard work of several craftsmen and artistic designers contribute a bigger hand in the success of this festival. Each year a different theme, specific to some of the Indian state is picked up for the fair and followed religiously. The theme gets reflected in the architecture of the ambience and its decorations. Apart from being an art and craft fair, Surajkund Mela also offers an insight into the gorgeous culmination and mix of different culture and traditions on the mystical land of India.

Pinjore in Haryana plays host to the Pinjore Heritage Festival, a yearly fair that offers one a chance to get a sneak-peak into the rich heritage, gardens of Pinjore as well as its promotion in the form of a potential tourist destination. Pinjore is an ancient town that finds its roots way back in Vedic times and has various tourist attractions in abundance, its gardens being the prime one.  This annual event is managed by the Haryana Tourism Department and other chief state bodies. The celebrations of the Pinjore Festival started in 2006. Each year, Yadavindra Garden, which is famed as one of the oldest as well as the most well maintained Mughal gardens around the globe is the festival’ s venue. The garden has an interesting 7-descending level of arrangement and after being established by the Mughal rulers, it has been taken care of by the rulers of Himachal Pradesh, the royal house of Patiala and the Gorkhas and now by the Haryana Tourism Department.

The Pinjore Heritage Festival is mainly an exhibition of the culture and tradition of the north Indian state of Haryana. A cultural concoction, this affair is attended by artists from all over the country who showcase their art and contribute towards the success of the event.

In Ambala, the most famous fair is held at Gopal-Mochan near Bilaspur in Jagadhari tehsil. There is a sacred tank of the same name in the place. The legend is that once Lord Shiva while rescuing Saraswati, who was being pursued by Brahma, struck off the latter’s head. A lock of hair was left in Shiva’s hand and his body was blackened. For a long time Shiva was unable to cleanse himself. One night, when he was resting at a cow shed he overheard the conversation between a cow and her calf. The calf said he was going to kill his master, a Brahmin, to avoid being castrated. The cow tried to dissuade the calf from the sin, but the calf said, it knew of a tank where it could cleanse itself from the sin of killing a Brahmin. Shiva followed the calf the next day and saw it kill its master. The bodies of the cow and the calf where then blackened until they cleansed themselves by bathing in Gopal Mochan tank. Shiva followed their example and was like wise cleansed. Since then the water of Gopal-Mochan have retained their virtue. It is considered by many to be more efficacious than the waters of the Ganges at Hardwar. The Rin Mochan is another water tank situated close to the Gopal-Mochan. A big fair is held in the village in the month of Kartik.

Haryana’s most famous fair is held in honor of the goddess of small-pox, Masani whose temple is in Gurgaon village. There is a legend about this temple.   There was a shrine, sacred to the goddess Devi, locally known as Masani at the village of Kesopur in the Delhi district. Some two hundred and fifty years ago according to tradition, the Goddess appeared in a dream to one Singha, a Jat of some influence and a resident at the village of Gurgaon. The Devi communicated to Singha that she wished to leave Kesopur and directed him to construct a shrine for her in his village. At the same time, she authorized the 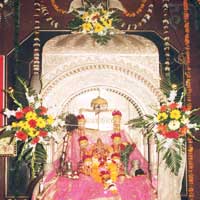 fortunate Singha to appropriate all the offerings at her shrine. The orders of the goddess were promptly carried out. The shrine was built and flourished, its fame spreading far and wide.  A visit to the shrine is an antidote for small-pox and women from great distances flock to it with their children to obtain this benefit. The greatest crowd is in April-May but all the year around steady stream of people flows, Monday being the favourite day. Singha and his heirs enjoyed the offerings for two hundred years.

In Haryana Diwali is celebrated with great enthusiasm. It comes in the middle of the month of Karthik. First comes the little Diwali on which rice and sugar put in vessels, with a paisa placed on the top, are given away to Brahmins and girls. The deceased ancestors are said to visit the house of their families on that day, and it is in their name that the ceremony is performed. Houses are whitewashed and cleaned. On the next day, or Govardhan, Diwali lamps are lighted in the evening and sweets distributed. On the following day all the sweepings are thrown out on to the refused dumps outside the village. The old lamps are also thrown their and new ones placed in the house. The rich and trading classes specially consider Diwali as their own festival. On this occasion they perform pujas, which are considered auspicious for their profession.  Diwali is also celebrated by gambling in various ways throughout the night accompanied by merry making. For children Diwali provides an occasion for fire works.

This is a religious festival, celebrated all over Haryana. It is connected with snake-worsh 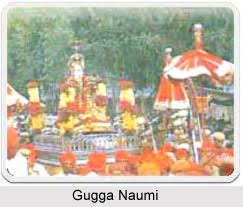 ip and observed in August-September. A number of legends have clustered around Gugga Pir or Zahir Pir (the saint). He is also referred to as Baggar wala because of his grave near Dadrewa near Ganga nagar, a tract over which he is said to have ruled. He was reputed to have the power of curing people of snake-bite. Monday is his day, the date being 9th. The shrine is distinguished by its square shape with minarets and domed roof. It is called ‘Mari’.

Sohna is famous for its hot springs, which have medicinal qualities, several thousand people assemble at Sohna on Somwati Amawas to bathe in sulphur springs. The crowd would be small if the festival happens to fall during harvest-time.

Holi is celebrated with considerable zest, particularly in the area bordering Uttar Pradesh. Four days before the festival, married women play Holi with their men folk by throwing colored water on them. The day following Holi, Dhulandi (Phag), men folk throw water on women who retaliate by a mock beating with sticks or kolras (twisted cloth strips). The men act as if they are powerless and they pretended attempts at shielding themselves lead to much fun and amusement.

Dussera is probably the chief Hindu festival, being associated with the great Epic Ramayana and its renowned hero, Rama. The celebrations last nearly a month. First come the Shradas, early in September and lasts over a fortnight. The Brahmins are fed on these days in memory of the deceased elders of the family. The Shradas are followed by Nauratas, which as the name implies are nine in number. Oats sown in the field or deposited in big utensils, are watered on each of these days. On the Dussera day, pudding (halwa) is eaten with rice and cured. The Brahmins are also fed. All the members of the family except woman put stalks of green oats on their head. Ram Leela is enacted in various places. On the last day the effigies of the demon king Ravana and his supporters are burned, which forms the concluding event. More about Dussera