We will learn about the latest schemes and project which is launched by Haryana government.

The state legislature of Haryana has propelled a plan named as “Uchch Shiksha Loan Yojana” or the Higher Education Loan Scheme for poor young lady understudies over the state. The principle target of this plan is to give credit office to those young ladies who have left their investigations fragmented for not having the capacity to pay the charge measure of higher examinations.

Under Uchch Shiksha Loan Yojana, the state government will give monetary help to penniless young lady understudies to finish their higher investigations. The plan will be worked by the expert of Women Development Corporation, Haryana.

Pradhan Mantri Suraksha Bima Yojana is one of the most affordable insurance schemes launched by the prime minister to provide  insurance cover to all the citizens of India at very low premium.

Besides this, two more such kind of schemes are running across the nation named as Atal Pension Yojana and Jeevan Jyoti Bima Yojana.

Haryana Government has launched e-Seva app for android mobile phones and is available for download from Google Play Store. The e-Seva app is an initiative of Haryana government to provide all the information about all the government services and welfare schemes. The app provides all the information about major welfare schemes and programmes being run by several departments of Haryana Government.

Haryana government has announced a new scheme named as “Mangal Nagar Vikas Yojana” for the development of urban areas. The announcement was made during the presentation of Haryana Budget for the financial year 2017-18.

In Haryana budget for the financial year 2017-18, the state government has announced two schemes for rural and urban development. The scheme ‘Deenbandhu Haryana Gram Uday Yojana’, named after Choudhary Chhotu Ram will focus on development of villages.

The announcement of Deenbandhu Haryana Gram Uday Yojana (DHGUY) was made by Capt Abhimanyu, the finance minister of Haryana while presenting the budget for 2017-18. 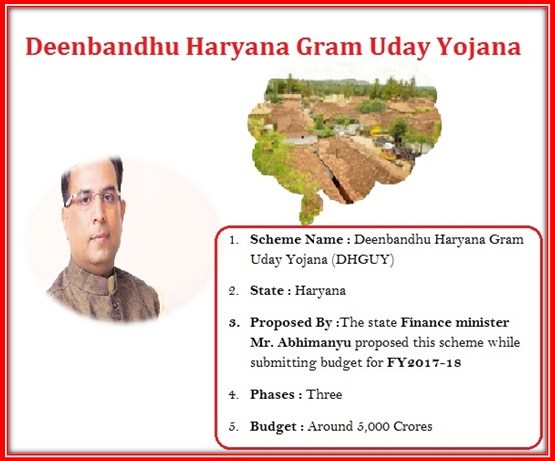 Under Deenbandhu Haryana Gram Uday Yojana, the state government will develop about 1500 villages having a population in the range of 3,000 to 10,000 people. In villages also, the government will provide physical, social and economic infrastructure facilities at par with urban areas.

The state government of Haryana is all set to create a team of about 60,000 youth under GRAVIT (Gramin Vikas Ke Liye Tarun) to educated the benefits of scheme to every person in villages.

The state government of Haryana has increased the scope of its Saksham Yuva scheme by including the unemployed graduates under its ambit from April 1st, 2017. The state government has taken the decision during a recent discussion about the progress of the scheme with Chief Minister Shri Manohar Lal Khattar.

At present, only unemployed post graduate youth is included under the scheme. Each registered unemployed post-graduate is provided a sum of Rs. 9000 per month including Rs. 3000 as unemployment allowance in lieu of 100 hours of work done by him.

As per the sources, 9,545 unemployed youth have registered themselves through the online portal at hreyahs.gov.in. Out of all the registered candidates, 1,356 have been engaged in different departments in the state as employment opportunities are being created for the unemployed post-graduates in different fields of their choice.

The state government of Haryana has decided to broader the cover of Saksham Yuva Scheme in Haryana by including science graduates under the scheme. The decision will come into effect from 1st April 2017. To create more job opportunities for the employed youth in Haryana, private sector will also be involved in the scheme.

Till now, the scheme was providing Rs 9,000 per month in lieu of 100 hours of work to unemployed postgraduates.

The decision was taken by Haryana CM, Manohar Lal Khattar after taking a review of scheme functioning. Through Saksham Yuva Scheme in Haryana, the private sector could find the best capable youth to meet their requirement.

E- Bhoomi has been launched by the Chief minister of Haryana Manohar Lal Khattar on Friday. E-Bhoomi portal is a land-purchase website for government projects, developed by industry body HSIIDC.

Together with the Department of Social Justice and Empowerment, the State Government of Haryana has started a financial assistance scheme for the unskilled children. Under this scheme, the government provides financial support of Rs. 700 per child per child. The main objective of this scheme is to provide financial assistance for the maximum of two children who have been deprived of support or care due to the death of their parents.