Food security can be described as a phenomenon relating to individuals and can be defined by nutritional status of the individual household member that is the ultimate focus, and the risk of that adequate status not being achieved or becoming undermined.

Food Security can defined as

Food security exists when all people, at all times, have physical, social and economic access to sufficient, safe and nutritious food which meets their dietary needs and food preferences for an active and healthy life. Household food security is the application of this concept to the family level, with individuals within households as the focus of concern.

Food insecurity exists when people do not have adequate physical, social or economic access to food as defined above. 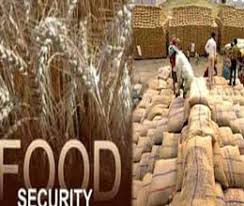 Food security includes at a minimum:

Food security is not guaranteed merely by adequate food grain production or even by food availability. It is more fundamentally linked to effective access to food, both physically and economically. Broadly speaking, livelihood security and livelihood access are important determinants of food access. According to observation made by M.S. Swaminathan Research Foundation and World Food Progamme 2001, “If people have access to livelihood, they would in general have access to food and nutrition.

Haryana State came into existence simultaneously with green revolution i.e. 1966-67. After the formation, Haryana emerge as leading State in field of agriculture production. The agricultural economy of Haryana is dominated by food grains. Haryana has emerged as one of the major food grains producing States in the country. Consisting only 2.3 per cent of country’s total area, Haryana has been contributing significantly to the food basket of the country.

With the advent of green revolution, Haryana emerge as main producer of two main food  grains i.e. wheat and rice. So the production of coarse grain and pulses declined in the State. Country registered robust economic growth in past decade and rise in per capita income the consumption of coarse cereals also goes down. The share of Haryana in coarse grain production recorded only 2.12 percent in 2012 -13.

Contribution of Haryana to procurement

The national objective of inclusive growth, which emphasis on social justice and progressive improvements in the living standards of the population, can only be realized by ensuring food grain for population at affordable prices. Food grain policy of India has three objectives: procurement of food grains from farmers at remunerative prices, distribution of food grains to the consumer particularly the vulnerable section of society at affordable prices, and maintenance of food buffer for food security and price stability. Thus the food policy of India tried to cover the Three dimension of food security availability, by ensuring food grains at MSP making food grain production profitable for the farmers accessibility by distributing of food grains at Central Issue Prices (CIP) and making accessible for weaker section through PDS system and last stability, by creating buffer stock. In order to ensure food security in country,

Government has enacted National Food Security Act (NFSA) under which food grains are to be provided to the States/UTs for distribution to the people at a highly subsidized prices .

Government has proposed various schemes to provide food grains in the state. Schemes such as  Antodaya Anna Yojana , Mid Day Meal Scheme (MDM), Wheat Based Nutrition Programme (WBNP) Annapurna Yozana Rajiv Gandhi Scheme for Empowerment of Adolescent Girls (RGSEAG) – SABLA, are the other major food program which is currently run by the GOI to ensure food grains for vulnerable section of the society. To provide food grain for all these schemes, the government procures grain directly from the farmers or from the open market at a MSP, which is decided by the central government on the recommendations of the Commission for Agricultural Costs and Prices (CACP). The function of procurement of food grains is entrusted to the Food Corporation of India (FCI), along with procurement FCI also do storage, movement and distribution of food grains. Procurement of food grains is key for ensuring food security of country. Haryana is one of the leading contributors in procurement of food grains. Wheat and rice are the crops which dominate Indian PDS.

Government has passed the National Food Security Act, 2013  with the objective to provide for food and nutritional security in human by ensuring access to adequate quantity of quality food at affordable prices to people to live a life with dignity. The Act provides for coverage of up to 75% of the rural population and up to 50% of the urban population for receiving subsidized food grains under Targeted Public Distribution System (TPDS), thus covering about two-thirds of the population. The eligible persons will be entitled to receive 5 Kgs of food grains per person per month at subsidized prices of Rs. 3/2/1 per Kg for rice/wheat/coarse grains. The existing Antyodaya Anna Yojana (AAY) households, which constitute the poorest of the poor, will continue to receive 35 Kgs of food grains per household per month.

The Act also has a special focus on the nutritional support to women and children. Besides meal to pregnant women and lactating mothers during pregnancy and six months after the child birth, such women will also be entitled to receive maternity benefit of not less than Rs. 6,000.

Children up to 14 years of age will be entitled to nutritious meals as per the prescribed nutritional standards.

In case of non-supply of entitled food grains or meals, the beneficiaries will receive food security allowance.

The Act also has provisions for setting up of grievance redressal mechanism at the District and State levels. Separate provisions have also been made in the Act for ensuring transparency and accountability.

Haryana has set up a State Vigilance Panel for regular supervision of the implementation of all schemes under the National Food Security Act, 2013.

The panel, formed under the chairmanship of the state food and supplies minister, would inform the district grievance redressal officer in writing of any violation of the provisions of the Act and also of any malpractice or misappropriation of funds found by it.

For these purposes, the state vigilance panel could nominate any officer or team of officers working in any department, board or corporation in the state as inquiry officers or team. He said that the director-general, food and supplies department, would be the member secretary of the committee.

In the state, pulses are all set to be part of the Haryana Food security scheme in Haryana. They were part of the supplies being provided under the scheme but are yet to reach beneficiaries because of a legal issue and departmental formalities over procurement. The pulses will cost the state exchequer an additional Rs 225 crore.

While the scheme will reach almost half of the state, Pulses will only be given to below poverty line (BPL) families and Antyodaya Anna Yojna (AAY) families. They will cost the government an average Rs 62 per kg and will be supplied to the beneficiaries at Rs 20 per kg. They are to be distributed to 12.84 lakh beneficiaries through fair price shops of the food and supply department with each family set to get two-and-a-half kg of pulses every month.

Problems like bulk supply for a longer duration has become a major hurdle for the department as prices of the pulses vary on a day-to-day basis. As per a rough estimate, the government will require about 3,000 metric tonne pulses for one-time supply.

Various hurdles in implementing the programme

Government would be giving pulses that have been due for the last two months as supplies have reached all the district headquarters. Programme has covered  nearly 60 per cent of the target. The government is distributing these supplies through the ration depots. The government is already on a slippery wicket in the matter of identifying beneficiaries and glaring discrepancies in the process has put it in an embarrassing situation. There is allegation that food and supplies department has bungled in identification of priority households and had drastically reduced their number.

Haryana Food security Act which is termed as a ‘game changer’ by the UPA-II Government,  the State Governments need to draw their own parameters to identify the beneficiaries. The Act, which made food a legal right, got Presidential assent in September 2013, and gave one year to the States for its implementation.

Biggest challenge of the country is to feed over 1.25 billion people. Despite economic growth and self-sufficiency in food grains production, high levels of poverty, food insecurity and malnutrition persist in India . The National Food Security Act (NFSA) passed in 2013 is a milestone in the history of India’s fight against hunger and malnutrition, as it claims to feed more than 800 million Indians with highly subsidized food grains. There is economy wide impact of NFSA on the Indian economy. It estimates  the labor requirement, GDP growth, and indirect impact on the other sector of the economy.