Poverty, low per capita income, under-development, unemployment, prompted the newly established Indian polity to adopt economic planning for the development of the country. The idea of economic planning can be traced to 1934, when M. Visvesverayya in his book ‘Planned Economy of India’, advocated for planning to increase the national income. It was taken up by the Indian National Congress in 1938 when it formed the National Planning Committee under the chairmanship of Jawaharlal Nehru. The Bombay Plan, the People’s Plan and Gandhian Plan, provided further impetus in the direction of economic planning. After independence, a Planning Commission was set up in March 1950 by a Cabinet Resolution with the Prime Minister as its ex-officio Chairman to formulate five year plans for the economic development of the country.

Role of Planning In India

There were two main features of India’s economic policy that emphasized the role of planning and intervention by the State in the development process of the Indian economy in the first three decades of planning. First, to accelerate economic growth economists and planners recognized that raising the rate of saving and investment was essential to accelerate the rate of economic growth.

Emphasis on Industrialisation, Second, the strategy of development, adopted since the adoption of Second Five Year Plan which was based on Mahalanobis growth model, laid stress on the industrialisation with an emphasis on the development of basic heavy industries and capital goods industries.

To Compensate for Market Failures

The dominant view in development economics in the fifties and sixties also laid stress on the planning by the State to compensate for ‘market failures’. It was argued that while market mechanism was efficient in distributing a given stock of available goods, it was quite inefficient in allocating resources over time for investment.

Regulatory Role of the State

There is another important aspect of the role of State and planning in the development of the Indian economy which dominated economic thinking in the pre-reform period. Though the private sector was given an important role to play in the framework of mixed economy, to achieve optimal allocation of resources among different industries according to plan priorities, economic activities in the private sector were required to be regulated by the State. Further, to achieve other objectives of planning such as restraining the concentration of economic power in a few big business houses, the private sector was subjected to industrial licensing controls.

Tackling the Problems of Poverty and Unemployment

The other problem which makes role of planning and state intervention important is the need to tackle the problems of poverty and unemployment. Since the beginning of the seventies the Indian planners realised, especially in the Fifth, Sixth and Seventh Five Year Plans, that even if growth rate of GDP was raised to 5 to 6 per cent per annum, it was not possible to make a significant dent on the problems of mass poverty and unemployment prevailing in the Indian economy.

India’s rate of economic development has not been very impressive by most standards. But compared to what it was prior to independence, there is cause for celebration. At independence in 1947, India was an extremely poor country with an annual per capita income of only $50 for its 350 million people. Life expectancy was 32 years and literacy rate was 17 percent. National savings rate was around 10 percent. Agriculture accounted for 60 percent of GDP and 80 percent of employment. Per capita food production and per capita income had been declining continuously for nearly the prior fifty years.

After independence, even under the growth-retarding effects of Nehruvian socialism and central planning, India’s performance improved. In a study of cross-country growth experience of 85 countries from 1960 to 1992, India’s performance is almost precisely average. This is poor in relation to the potential that India has given the degree of human, institutional, and natural capital at its command. Economists such as Jagdish Bhagwati have attributed that failure to the “nearly three decades of illiberal and autarkic policies” before the reforms of the early 1990s.

Some observers have called the change from an inward-looking autarkic economy to an open, market-driven one since 1990 as the Indian Growth Miracle. The neo-liberal economic reforms propelled India to become one of the fastest-growing economies in the world. Yet India should have been one of the fastest growing economies in the decades before 1990, and not just in the post 1990 period. It did not because its planners chose to insulate the economy from the global economy. That conferred some benefits in terms of shielding India from external shocks, but it paid a very high price in terms of foregone growth. 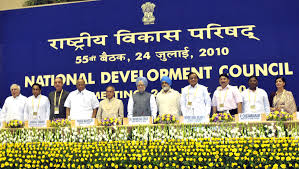 From planning commission to NITI ayog

Reflecting the spirit and the changed dynamics of the new India, the institutions of governance and policy have to adapt to new challenges and must be built on the founding principles of the Constitution of India, the wealth of knowledge from our civilizational history and the present-day socio-cultural-economic contexts. The aspirations of India and its citizens require institutional reforms in governance and dynamic policy shifts that can seed and nurture unprecedented change.

In keeping with these changing times, the Government of India has decided to set up NITI Aayog (National Institution for Transforming India), in place of the erstwhile Planning Commission, as a means to better serve the needs and aspirations of the people of India.

In essence, effective governance in India will rest on following ‘pillars’: